Giles Clarke/Getty Images Reportage
A Yazidi Kurd from Sinjar who was abducted by ISIL, pictured here in Mamilyan Camp for internally displaced persons in Akre, Iraq.

Karim Asad Ahmad Khan, told the Security Council that the “experiences and needs of the survivors of ISIL crimes, and the families of its victims”, were firmly at the centre of UNITAD’s mission.

“All communities, whether Shabak, Kaka’i, Shia, Sunni, Christian, Turkmen or Yazidi have suffered from the brutality and debased acts of ISIL and all their voices must be heard in our efforts to hold those responsible to account”, Mr. Khan said.

Having been up and running in Iraq for a year, tasked with promoting accountability for the crimes committed by Da’esh during its years of terror beginning in 2014, the team is now “fully operational” said the Special Adviser, with a cohort of 107 staff members.

Presenting his third report, Mr. Khan said he had met tribal leaders, family members and survivors, across the north, to hear their accounts and “understand their personal experience of the scale and severity of ISIL crimes.”

‘Immeasurable strength’ of women and girls

He described visiting camps for the internally-displaced in Dohuk, only last week. “I was humbled by the immeasurable strength of the women and girls I spoke to. Despite suffering abduction, enslavement and unspeakable treatment, they were willing to reengage with these memories in order to assist in holding their abusers to account.”

“It is our responsibility to honour their strength by delivering on the promise…that those who inflicted their suffering will be held accountable,” said Mr. Khan.

Key evidence collection has been completed in recent weeks. He cited comprehensive three-dimensional laser scanning of crime scenes in the Yazidi city of Sinjar; testimonials from Dohuk, and “the successful use of social media crowdsourcing campaigns” to collect information on suspected ISIL members, that have generated thousands of responses. DNA profiles have also been retrieved from mass grave sites.

He said they now had a group of “primary investigative targets” for all of their lines of investigation, identifying 160 different perpetrators of attacks against the Yazidis in Sinjar alone.

A relationship of mutual support and collaboration continues between the team and national authorities, he added, describing Government support as “exemplary”, including vital engagement with the judiciary. He cited the national investigation and UN team investigations into the massacre of unarmed Iraqi air force cadets at Tikrit Air Academy in 2014, saying “an excellent working relationship has been established”.

“Following the unanimous renewal of the mandate of the Investigative Team at the request of the Government of Iraq in September this year, I have been encouraged by our renewed common purpose in strengthening modalities for cooperation” said Mr. Khan.

He underlined his “personal commitment” to ensuring the team’s work with national authorities and the Kurdish Regional Government would continue through mutual cooperation.

Our capacity to demonstrate continued value to Iraqi counterparts, and the people of Iraq more broadly, will be essential if we are to build on successes achieved to date”, he added. “Reflecting this, and in line with the Terms of Reference, we have sought to make every effort to share knowledge and technical assistance with national authorities in order to support their investigation of crimes committed by ISIL in line with international standards.”

He noted that cooperation by all investigators inside Iraq with criminal proceedings going on in “third States” involving ISIL terrorist suspects, was also bearing fruit.

“The Investigative Team has been formally approached by an additional three States regarding the potential provision of support to ongoing domestic proceedings concerning crimes committed by ISIL, with a number of other States indicating that such assistance may be of value in supporting their respective domestic prosecutions.”

With partnership at the core of the team’s success so far, the Special Adviser said there must be a “broader bond” with the international community also, for the benefit of all survivors. He praised financial and personnel support offered so far by Australia, Germany, Finland, France, the United States, the United Kingdom, United Arab Emirates, the Philippines, Sweden and Uganda.

“The recent renewal of our mandate represents a reaffirmation from this Council that it is not enough for us to condemn the barbarity and depravity of ISIL. To deliver for survivors, we must ensure that the individuals most responsible for these crimes are personally held to account.”

UN Photo/Loey Felipe
Kachi (on screen), a member of Iraqi civil society, and a Yazidi from Sinjar District who survived the mass executions in the village of Kocho in August 2014, addresses the Security Council meeting on threats to international peace and security

‘I survived by God’s will to be a witness’

Kachi is a member of Iraqi civil society, and a Yazidi from Sinjar who survived the mass executions in the village of Kocho, recounted the horrific events of August 2014 when his village of 1,250 people was besieged and overwhelmed by Da’esh terrorists, their possessions confiscated and men separated from the women.

The men were then killed in a mass shooting.  “I survived by God’s will to be a witness,” he said, describing how he escaped from a pile of dead bodies that included three of his brothers, as well as nephews and cousins.

His elderly step-mother had also been executed, along with more than 70 elderly women who were shot or buried alive, and his wife and daughters taken to a slave market and sold.  His three-month-old daughter died of thirst and hunger and he was one of 19 who lived: “I can still hear my wife and daughters screaming when the members of the terrorist organization of Da’esh took them”.

Thanking the Security Council for creating UNITAD to establish accountability for the crimes of Da’esh, he said that prosecuting those responsible for their crimes is not enough.  The international community must also acknowledge that the crimes committed against the Yazidi community amount to genocide.  “I also hope that the Security Council continues its support to the investigative team to establish a fair mechanism for accountability to prevent similar crimes and genocides in the future,” he stated.

For more on the meeting, and ambassadors’ speeches on the issue, go our Meetings Coverage Section, here. 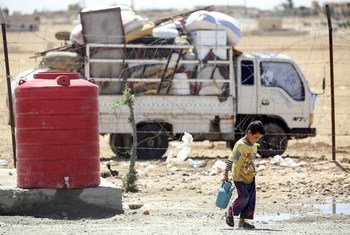 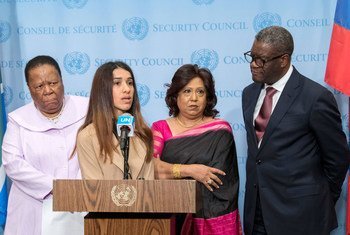