Karim Asad Ahmad Khan told the Security Council that the Team has already identified 344 alleged Da’esh perpetrators, the Arabic name for the extremist group, involved in the 2014 massacre of Yazidis in the Sinjar district of northern Iraq.

Many categories of crimes

The team has also identified at least seven categories of crimes for which Da’esh suspects could potentially be prosecuted in connection with the mass killing of unarmed cadets and military personnel at the Tikrit Air Academy six years ago.

Meanwhile, in Mosul, two mass grave excavations that got underway in March, in cooperation with Iraqi and Kurdistan Regional Government authorities, are set to form a key pillar for investigations in the months to come, he added.

“In the 20 months since our arrival in Iraq, real progress has been made”, said Mr. Khan as he presented the Council with the fourth report from the team which serves officially to “Promote Accountability for Crimes Committed by Da’esh/Islamic State in Iraq and the Levant (UNITAD)”.

Our commitment to the communities of Iraq will only be satisfied when justice is delivered - Investigation Team head, Karim Khan

Breakthroughs in identifying and using new sources of evidence have opened the way to fulfilling international pledges of justice for the victims and survivors of the terrorist group, he said, which imposed a self-styled Islamist Caliphate on both Iraq and parts of Syria, before being militarily defeated.

If fully harnessed, these new sources will have the potential to mark a paradigm shift in the prosecution of ISIL members for the crimes they committed in Iraq, he stated.

“But we must not allow our focus to shift”, he added.  “It is essential that we continue to demonstrate the same urgency of action that is being demanded by survivors in Mosul, Baghdad, Sinjar, the Nineveh Plains and elsewhere in Iraq.”

The Council, through resolution 2379 (2017), established UNITAD to support domestic efforts to hold Islamic State in Iraq and the Levant (ISIL/Da’esh) accountable by collecting, preserving, and storing evidence in Iraq of acts that may amount to war crimes, crimes against humanity and genocide.

Mr. Khan, a barrister and Queen’s Counsel from the United Kingdom with more than 25 years’ experience as an international criminal law and human rights lawyer, was appointed by Secretary-General António Guterres in May 2018 to lead the effort.

Briefing the Council via video-teleconference, Mr. Khan said that UNITAD – “working with creativity and focus” – is ensuring that the momentum it has created is not lost even in the face of challenges posed by the ongoing COVID-19 pandemic.

Through close cooperation with the Iraqi judiciary, the Team has obtained more than two million call data records from Iraqi mobile phone service providers relevant to its investigation of crimes against the Yazidi community, he said.

Similar data has been gathered in connection with the Tikrit Air Academy massacre, he said, explaining how it can be used to locate where persons of interest might have been at a given point in time, retrace the movements of additional suspects and build a incontrovertible picture of events at major crime scenes.

In addition, Iraq mobile phone service providers have also agreed to preserve all call data records from 2014 that might be relevant to UNITAD’s investigations.

Meanwhile, the forensic extraction of data from mobile phones, laptops and other devices seized from ISIL by the Iraqi military has revealed details – and video- about the group’s inner workings.

But creating an archive of ISIL atrocities is not enough, Mr. Khan emphasized.

“Our commitment to the communities of Iraq will only be satisfied when justice is delivered in court, when the survivors of ISIL atrocities are able to see their abusers held accountable in accordance with the rule of law, based on incontrovertible evidence collected in line with international standards.” 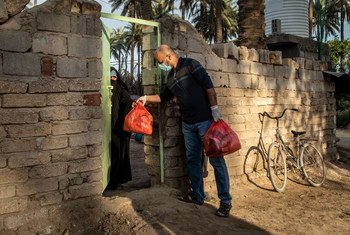 Despite compounding crises that include the COVID-19 pandemic and plummeting oil revenues, a more prosperous and inclusive Iraq can be achieved provided the political will is there, the top UN official in the country told the Security Council during a virtual meeting held on Tuesday. 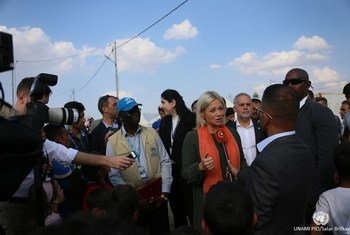