Saving lives by improving road safety is “one of the many objectives of the 2030 Agenda for Sustainable Development”, the United Nations chief said in his message for the global day set aside for remembering the victims of traffic accidents.

Noting that more than 1.3 million people die in road accidents every year, Secretary-General António Guterres pointed out that more young people between the ages of 15 and 29 die from road crashes annually than from HIV/AIDS, malaria, tuberculosis or homicide. 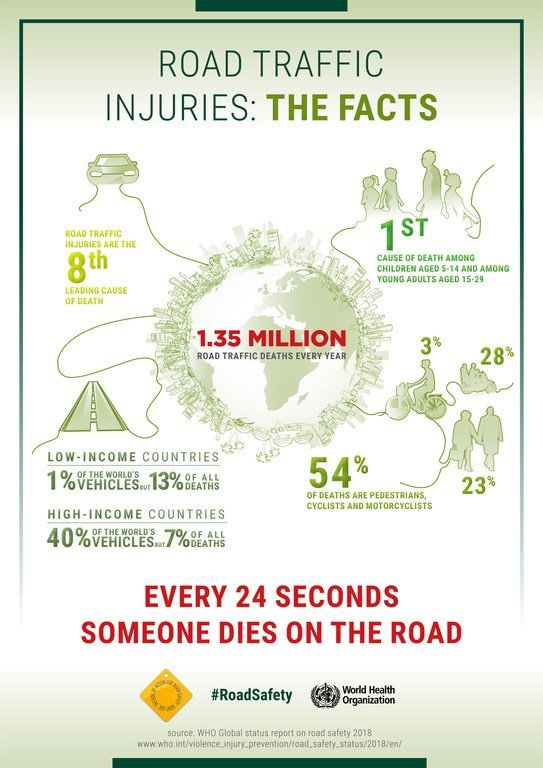 “The World Day of Remembrance of Road Traffic Victims is an opportunity to reflect on how we can save millions of lives,” he said.

And since 2015, his Special Envoy on Road Safety, Jean Todt, has worked to mobilize political commitment, raise awareness about UN road safety conventions, foster dialogue on good practices and advocate for funding and partnerships.

“While the scale of the challenge is enormous, collective efforts can do much to prevent these tragedies”, the UN chief attested.

In 2018, a UN Road Safety Fund was launched to finance actions in low- and middle-income countries, where around 90 per cent of traffic casualties occur.

And next February, a global ministerial conference on road safety will be held in Sweden to strengthen partnerships to accelerate action.

“Urgent action remains imperative”, concluded the Secretary-General. “On this World Day, I call on all to join forces to address the global road safety crisis.”

According to DSS, they have a “dramatically transformative impact” on people’s lives with most causalities remaining “almost invisible to society at large”.

Last February, with the participation of UN leaders from the Secretariat, UN Development Programme (UNDP), UN Population Fund (UNFPA) and others, including the Chef de Cabinet and Special Envoy on Road Safety, the UN launched the Road Safety Strategy in New York and Geneva that showed unity and the shared message of road safety across the UN-system.

The Day has become an important tool in efforts around the world to reduce road casualties.

It offers an opportunity to draw attention to the scale of emotional and economic devastation road crashes cause and recognizes the suffering of victims and the work of rescue services.

Ending fatal road crashes are in line with the 2030 Agenda, particularly in line with Sustainable Development Goal 3 (SDG 3), which encompasses good health and wellbeing and SDG 11 on sustainable cities and communities.

This takes leadership in demonstrating outstanding road safety behavior every day and working together to find the best solutions.

♦ Receive daily updates directly in your inbox - Subscribe here to a topic.
♦ Download the UN News app for your iOS or Android devices.
World Day of Remembrance of Road Traffic Victims|road safety

With some 1.3 million drivers, passengers and pedestrians dying each year on the world’s roads, the United Nations took a major step to address this tragedy by launching on Thursday a trust fund to spur action that could save lives and prevent the loss of opportunity associated with road accidents.

Calling for greater efforts to reduce road traffic deaths worldwide, the United Nations envoy for road safety on Monday stressed that a proposed UN fund, along with national investments, would turn the tide of rising fatality numbers.