Calling for greater efforts to reduce road traffic deaths worldwide, the United Nations envoy for road safety on Monday stressed that a proposed UN fund, along with national investments, would turn the tide of rising fatality numbers.

“If established, a global Fund would be of huge significance in the fight to turn the tide of rising fatality numbers, but only if the catalytic funding is complemented by national investments made by governments towards road safety,” Jean Todt, UN Secretary General’s Special Envoy for Road Safety told a ministerial world conference in New Delhi, India.

He said that road safety receives 1,000 times less than other causes with a similar fatality rate like AIDS, tuberculosis or malaria.

The proposal for a ‘UN Road Safety Fund,’ which is now under the UN Secretary-General’s consideration, provides for the first time a clear indication of the amount of funding required to attain relevant targets under the 2030 Agenda for Sustainable Development.

India accounts for more than 10 per cent of all road related fatalities recorded globally, despite having only three per cent of the world’s vehicles, and the reforms put forward by the Government to the Motor Vehicles Act would save many thousands of lives and serious injuries on the country’s roads, he added.

“The outlook is startling, especially when we take into account the expected rise in urbanization as well as increase in the number of motor vehicles which sadly, is expected to increase road traffic fatalities if no changes are made,” he said. “If we are to make progress towards the global targets, a dramatic upscaling of our efforts is urgently required.”

He said that in France, where he is from, 18,000 lives were lost in the early 1970s before road safety became a national priority. That number has since be reduced to just over 3,000 today despite car numbers going up threefold.

The turnaround is a result of a focus on safer roads, drivers, and vehicles; improved post-crash care and the enforcement of strong legislation, he added.

“The truth is that road safety is morally and economically a sound investment,” he stressed, citing initiatives, such as Mexico’s ‘Vision Zero’ Campaign that aims for a 35 per cent reduction in road traffic fatalities and Malaysia’s public declaration to upgrade 75 per cent of road infrastructure by 2020.

At the conference, transport ministers adopted the Delhi Declaration, in which they reaffirmed their commitment to effectively implement the ambitious road safety-related targets in the 2030 Agenda and welcomed the discussion on the establishment of a UN Road Safety Fund. 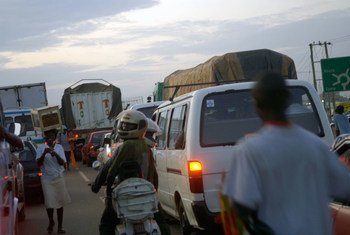 Some 650 people are killed each day in road accidents throughout Africa, a senior United Nations official today said, calling for more to be done to keep drivers – as well as pedestrians, cyclists and motorcyclists – safe.