UNICEF/Mackenzie
Children look over the wall on the roof of their house at clouds of smoke from oil wells which were set on fire by ISIL when they fled Qayyarah, a town south of Mosul. (file)

Greater action is needed to protect the environment during wartime if the world is to realize the goal of a more sustainable future for all people and the planet, the head of the UN Environment Programme (UNEP) warned on Wednesday.

Inger Andersen’s comments came in a message marking the International Day for Preventing the Exploitation of the Environment in War and Armed Conflict.

Despite protection afforded by several legal instruments, the environment continues to be “the silent victim of armed conflicts worldwide”, according to UNEP.

Even in the most complex and challenging scenarios, we have to up our ambition to protect our planet.My message on International Day for Preventing the Exploitation of the Environment in War and Armed Conflict ⬇️ #EnvConflictDay https://t.co/amP6bMLS6S

As Ms. Andersen stated, environmental factors are rarely, if ever, the sole cause of violent conflict.

“However, the exploitation of natural resources and related environmental stresses can be implicated in all phases of the conflict cycle, from contributing to the outbreak and perpetuation of violence to undermining prospects for peace”, she explained.

“Access and flow of water, land degradation, floods and pollution, in addition to competition over extractive resources, can directly exacerbate tensions and lead to eruption of conflicts, as is the case for resource depletion issues such as deforestation, soil erosion and desertification.”

From Agent Orange to ISIL

Public concern over the targeting and use of the environment during the heat of battle first peaked during the Viet Nam War, according to UNEP, where the deployment of the toxic herbicide Agent Orange led to massive deforestation and contamination.

The resulting international outcry sparked the creation of two new international legal instruments: the Environmental Modification Convention in 1976, and an amendment to the Geneva Conventions, which regulate the conduct of war, one year later.

UNEP recalled that the extensive pollution caused by the intentional destruction of oil wells in Kuwait during the 1991 Gulf War sparked further calls to strengthen legal protection of the environment during wartime.

Since then, the devastation has continued. For example, the bombing of dozens of industrial sites in the Kosovo conflict in 1999 resulted in toxic chemical contamination.

More recently, ISIL militants set oil wells on fire when they retreated from areas in Iraq that they had previously held, triggering the release of what UNEP described as a “toxic mix” of gases and other compounds into the air.

Protect the planet, even during conflict

Ms. Andersen, the UNEP Executive Director, noted that in recent decades, there have been fundamental changes in how the international community understands challenges to peace and security.

The rise in non-state actors means that security is not just viewed in terms of conventional military threats.

“This evolving security landscape requires a shift in the way the international community engages in conflict management”, she said.

“From conflict prevention and early warning to peacemaking, peacekeeping and peacebuilding, the potential role of natural resources and the environment must be taken into consideration at the onset.”

UNEP has been working since 1999 to determine the environmental impacts of war, Ms. Andersen said, including through identifying gaps and weaknesses in the international laws that protect the environment during wartime.

“However, if we are to achieve the Sustainable Development Goals, we need to act with greater urgency and coherence to reduce the threats armed conflicts pose to our environment and ultimately our health and livelihoods”, she said.

“On this International Day for Preventing the Exploitation of the Environment in War and Armed Conflict we have only one way forward: to up our ambition to protect our planet, even in the most complex and challenging scenarios.” 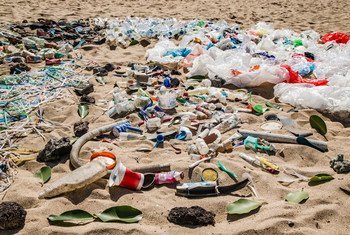 Each year, an estimated eight million tonnes of plastic end up in the ocean – equivalent to a full garbage truck dumped into the sea every minute - the United Nations Environment Programme (UNEP) has said.