Tensions around global trade and technology continue to rise and the international community needs to “do everything possible” to prevent the world being split into two competing spheres, led by the United States and China.

That was the message from UN Secretary-General António Guterres on Saturday, speaking during the World Bank Group and International Monetary Fund (IMF) Annual Meetings in Washington DC.

In remarks to the International Monetary and Financial Committee, the UN chief said that "during tense and testing times" he continued to “fear the possiblity of a Great Fracture – with the two largest economies splitting the globe in two – each with its own dominant currency, trade and financial rules, its own internet and artificial intelligence capacities and its own zero-sum geopolitical and military strategies.”

At the #WBGMeetings, @antonioguterres stressed we must do everything possible to maintain a universal economy with respect for international law; a multipolar world with strong multilateral institutions, such as the @WorldBank & @IMFNews. His remarks: https://t.co/VJRmkiUGjW

A trade war between the two economic giants is threatening to wipe out gains across the global economy, which could shrink global GDP next year “equivalent to the whole economy of Switzerland” said the new head of the IMF, Kristina Georgieva, just a few days ago.

Mr. Guterres told world financiers that “it is not too late to avoid” the division, but “we must do everything possible to avert this...and maintain a universal economy with universal respect for international law; a multipolar world with strong multilateral institutions, such as the World Bank and IMF.”

He noted three main areas where fiscal policy and investment in the future would be pivotal. First, make tax systems “smarter, greener, and more aligned behind the sustainable development and climate action agendas”, he urged.

Third, “it is time to break the cycle of excessive debt build-up followed by painful debt crises”, meaning taking a systemic approach to lend and borrow more responsibly.

And we must keep a focus on countries particularly vulnerable to the impacts of the climate crisis, namely Small Island Developing States.  I fully support proposals to convert debt to investment in resilience such as through the Debt for Climate Adaptation Swap initiative”, noted the UN chief. “We should move this from idea to reality.

Together, let us raise ambition for development finance, climate finance, and finance that is inclusive and enables markets to grow, businesses to thrive and people to live in dignity.”

‘Great opportunities’ ahead, for climate action

Speaking at a meeting of the Coalition of Finance Ministers for Climate Action, Mr. Guterres said that the 44-member group launched just six months ago, was “a vital part of our response to the climate emergency”.

The Climate Action Summit last month in New York had shown “the world is waking up to the crisis”, with “great opportunities” ahead to reduce air pollution, save billions of dollars on disasters fueled by global warming, and unlock the true benefits of the green economy.

Despite a “glaring gap in ambition and finance” finance ministers can turn the tide: “You come to the table with a mix of tools, including tax policy, controlled spending and climate budgeting...And you can end counter-productive subsidies for fossil fuels and pave the way for what I would like to see as a major trend: shifting taxation from income, to carbon.”

Sweden and Colombia are already using carbon taxes; Uganda is implementing a Climate Change Budget Tagging System; and the island of Dominica has used fiscal policy to improve preparedness for climate shocks, following a devastating hurricane.

“Your Coalition is taking the ‘whole of government’ approach we need for systemic change. We need to have in place by COP26, country-level road maps and fiscal policies for economic, technological and energy transitions”. 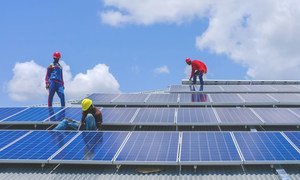 Time to step up: UN summit to push for development finance breakthrough

A sustainable global economy – one that preserves the planet and improves lives everywhere – is also a huge opportunity to create new jobs and market opportunities worth trillions of dollars, says the UN. But to make it happen, the international community needs to rapidly scale up investment. 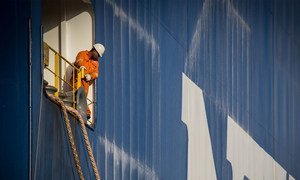