UN Photo/Logan Abassi
The United Nations Mission in Haiti (MINUSTAH) works with members of Haiti's Provisionary Electoral Council (CEP) to gather and transport voter's ballots from around Haiti to the capital, Port au Prince for tabulation.

This would be in the form of “a new partnership” said Secretary-General António Guterres, recognizing the substantial contribution made to the Caribbean island nation, through 15 years of UN Stabilization Mission, MINUSTAH, and the UN Mission for Justice Support in Haiti (MINUJUSTH).

In a statement, Mr. Guterres said that the new UN Integrated Office in Haiti (BINUH), which started operations on Wednesday, and the UN country team that has operated continuously in Haiti, “will integrate their activities to support national efforts to bring about lasting stability and the implementation of the 2030 Agenda for Sustainable Development.”

“He expresses the deepest respect to the memory of the 188 UN military, police and civilian personnel who lost their lives in Haiti since 2004. He also praises the vital contribution of the UN development and humanitarian partners to the fulfilment of the missions’ mandates”, the statement added.

Mr. Guterres said he was “concerned by the current political crisis and its adverse impact on the security situation and the lives of Haitians.” He urged all Haitian stakeholders to “engage in genuine dialogue and prevent a further escalation in violence that threatens to reverse stability gains.”

For weeks now, popular unrest and street demonstrations have roiled the country, focused on calls for the president to step down.

The conditions have created serious challenges for the delivery of humanitarian aid by UN agencies. After a hiatus, the UN Children’s Fund UNICEF, began the delivery of diesel and oxygen to 29 hospitals affected by the crisis last weekend, while the World Health Organization (WHO) delivered medicine to hospitals in the capital Port-au-Prince. On Sunday, for the first time in three weeks, the World Food Programme was able to deliver food to 14 schools that are still functioning.

According to news reports, President Jovenel Moïse held a press conference on Wednesday saying that he had no intention of leaving office.

In his statement, the UN chief called on the Haitian National Police, “which has assumed full responsibility for the security and protection of the Haitian people - and building upon the support provided by MINUSTAH and MINUJUSTH over the past years - to discharge its duties with due regard for all people and their human rights.”

The statement concluded noting that “while continuing to uphold all ongoing efforts for the elimination of cholera, which has seen significant progress, and the resolution of pending cases of sexual exploitation and abuse, the Secretary-General reiterates the unyielding commitment of the United Nations to Haiti’s stability and prosperity.” 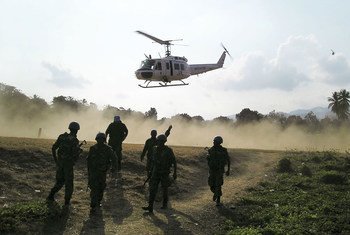 Although 15 years of UN peacekeeping in Haiti have drawn to a close, the Organization’s commitment to strengthening and stabilizing the country will continue, the Security Council heard on Tuesday. 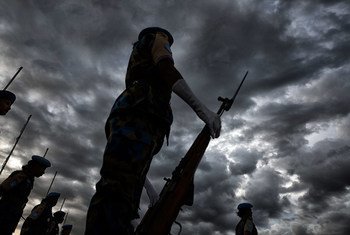 UN Mission in Haiti calls on protestors, authorities, to refrain from violence

Following days of intensifying protests in Haiti, Spokesperson Stéphane Dujarric said on Monday the UN was “concerned by reports of violence and arson” across the country.