President Kassym-Jomart Tokayev made the appeal in his first speech to the UN General Assembly’s annual general debate.

Seventy years ago, during the Soviet era, Kazakhstan was the site of the first atomic bomb test when more than 450 nuclear devices were exploded near Semipalantinsk, today known as Semey.

Mr. Tokayev stated that achieving a nuclear-free world has become an essential part of national identity.

“We stem from the firm conviction that nuclear weapons are no longer an asset but a danger to global peace and stability,” he said.

The country is also behind the adoption of the International Day Against Nuclear Tests, observed annually on 29 August, the anniversary of the Semipalatinsk tests.

“Kazakhstan believes that the current issues on Iran’s Joint Comprehensive Plan of Action (JCPOA) and denuclearization of the Korean Peninsula should be settled only by political means, with due respect to each other’s interests and concerns,” Mr. Tokayev said.

The President also highlighted his country’s contribution to peace and security.  The capital, Astana, has hosted 13 rounds of negotiations on the Syrian crisis.

Regarding counter-terrorism efforts, he reported that Kazakhstan and partners this year undertook a special humanitarian mission to repatriate nearly 600 citizens from war zones in Syria.

“We are ready to share our experience with other countries and urge them to take similar actions,” the President said.

♦ Receive daily updates directly in your inbox - Subscribe here to a topic.
♦ Download the UN News app for your iOS or Android devices.
General Debate 74|kazakhstan 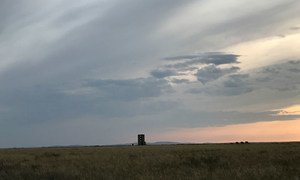