UN Photo/Manuel Elias
A sign language interpreter during the opening of the Ministerial segment of the High-Level Political Forum on Sustainable Development. (17 July 2017)
23 September 2019
Human Rights

Sign languages are crucial to “express oneself, connect with others and participate in all aspects of economic, social, cultural and political spheres”, United Nations Secretary-General António Guterres said in his message for International Day of Sign Languages, on Monday.

“Their use is also critical to ensuring access to information and services, including during emergencies, and to realizing the human rights of the more than 70 million deaf people around the globe”, he continued.

On Monday's International Sign Language Day, actor & disability advocate@NyleDiMarco explains how access to education allows everyone to be part of the conversation on global issues. https://t.co/xFJ3i1H7sO #GlobalGoals pic.twitter.com/a4Hw3j61VK

According to the World Federation of the Deaf, there are approximately 72 million deaf people worldwide, more than 80 per cent of whom live in developing countries. Collectively, they use more than 300 different sign languages.

“Early introduction and quality inclusive education in sign language are essential for their full and effective participation, as guided by the Convention on the Rights of Persons with Disabilities”, maintained the UN chief.

“This International Day recognizes the importance of sign languages for achieving the Sustainable Development Goals and fulfilling its core promise of leaving no one behind”, underscored Mr. Guterres.  “It also offers an opportunity to support and protect the linguistic identity and cultural diversity of all sign language users”.

The Convention on the Rights of Persons with Disabilities recognizes and promotes the use of sign languages, spelling out that sign languages are equal in status to spoken language. Moreover, it obligates States parties to help people to learn sign language and promote the linguistic identity of the deaf community.

The UN chief pointed out in his message that with the adoption of the UN Disability Inclusion Strategy earlier this year, the UN “established a foundation for sustainable and transformative change on disability inclusion”.

“We will lead by example”, concluded the Secretary-General. “On this International Day of Sign Languages, let us reaffirm our commitment to advancing the rights of deaf people everywhere”.

♦ Receive daily updates directly in your inbox - Subscribe here to a topic.
♦ Download the UN News app for your iOS or Android devices.
International Day of Sign Languages

Sign of the times: COVID-19 response and recovery must be accessible says Guterres 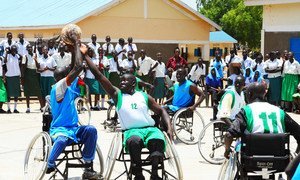 Disability inclusion is not only a fundamental human right, it is “central to the promise” of the 2030 Agenda on Sustainable Development, UN Secretary-General António Guterres told the annual conference on the Convention of Rights of Persons with Disabilities, which began on Tuesday. 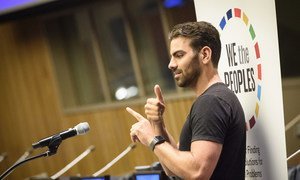 Nyle DiMarco is just a foreigner speaking a different language. That’s how the actor, model and advocate introduces himself to people who have not met a deaf person before.