Nyle DiMarco is just a foreigner speaking a different language. That’s how the actor, model and advocate introduces himself to people who have not met a deaf person before.

Mr. DiMarco, who reached fame after winning America’s Next Top Model in the United States, advocates for children learning sign language at an early age.  The 29-year old grew up in an all-deaf family and has more than 25 relatives who are deaf.

“I advocate for early education because growing up, my life was really privileged. My deaf parents knew exactly how to raise a deaf child,” Mr. DiMarco told UN News during a visit to the United Nations Headquarters for an event linked to the Sustainable Development Goals (SDGs).

On Sunday, the UN is marking the first International Day of Sign Languages, at the start of the official International Week of the Deaf. The UN General Assembly selected 23 September to coincide with the date the World Federation of the Deaf (WFD) was founded, in 1951. WFD consists of 135 national associations of deaf people and strives to defend their human rights.

Mr. DiMarco studied in a deaf school and attended a private university for deaf and hard-of-hearing students. Growing up with an education, Mr. DiMarco says he was able “to define who [he] was.” He played sports, was involved in different organisations and skateboarded.

The advocate is among 72 million deaf people worldwide, of whom only 2 per cent have access to a formal education.

“How can they be expected to succeed and have the same successes in their lives as someone with the same privileges that I had,” Mr. DiMarco said of other deaf people who grew up without setting foot in a classroom.

He noted that in some countries sign language is considered “a mere gesture” which results in deaf children being deprived of a language, and also unable to define their own lives. 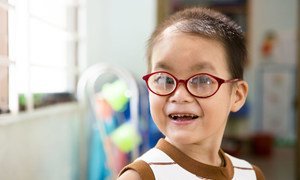 Inclusive education, economic empowerment and technological innovations were the focus of discussion on Tuesday as world leaders gathered in London for the first-ever United Nations-backed Global Disability Summit. 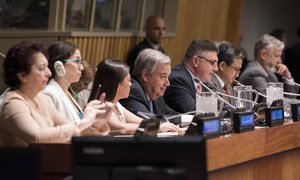 Cementing and protecting the rights of around 1.5 billion people around the world in accordance with the Convention on the Rights of Persons with Disabilities is a “moral imperative” said United Nations Secretary-General António Guterres on Tuesday.