UNMISS/Nektarios Markogiannis
An art exhibition in Juba, supported by the UN mission in South Sudan (UNMISS), seeks to educate people about gender and sexual based violence. (May 2019)
5 September 2019
Peace and Security

In the second quarter of 2019, the United Nations received 38 allegations of sexual exploitation and abuse (SEA) involving UN personnel, including civilian and uniformed personnel from peacekeeping operations, as well as those from agencies, funds and programmes, according to the latest figures released on Thursday.

Spokesperson for the Secretary-General, Stéphane Dujarric, told reporters at UN Headquarters in New York, that not all allegations have been fully verified, and many are in the preliminary assessment phase, with just one of the 38 allegations substantiated through an investigation, and eight pending further investigation by Member States.

Additionally, two allegations were found to not be substantiated, while 16 cases are in the process of being investigated. Of those, 14 are under preliminary assessment to determine if there is sufficient information for them to remain active. Two allegations, meanwhile, remain under review as limited information has been provided, and four have been closed.

In total, 43 victims have come forward with allegations. Of those, 19 are women, 10 are girls, and 10 females of unknown age. There is one male, two boys, and one unknown victim, whose gender has not been identified.

Of the allegations, 12 are categorized as sexual abuse, “actual or threatened physical intrusion of a sexual nature, whether by force or under unequal or coercive conditions,” as defined by the UN.

Nineteen cases were considered sexual exploitation, meaning, “any actual or attempted abuse of position of vulnerability, differential power or trust, for sexual purposes, including, but not limited to, profiting monetarily, socially or politically from the sexual exploitation of another.”

Another 10 allegations have been categorized as “other,” while two are of unknown nature, Mr. Dujarric reported.

Various concrete initiatives have been put in place to date, including:

This quarter also saw 39 allegations involving non-UN personnel working for implementing partners—those mandated by the UN to carry out its programmes. These involve 42 victims, and 39 perpetrators.

The United Nations is steadfast in its implementation of the Secretary-General’s strategy to combat sexual exploitation and abuse. From this quarter onwards, the organization will publish monthly updates on the status of previously reported allegations, dating back to 2017, when the current reporting framework began.

Strengthening engagement with Member States, and encouraging their Governments to join the Secretary-General’s Circle of Leadership on prevention, launched in September of last year, is another measure the organization is taking to stamp out further incidents.

Finally, Secretary-General António Guterres is continuing to encourage all Member States to become signatories to the Voluntary Compact, to which 101 States have committed so far, in a firm commitment to implementing a Zero Tolerance policy.

♦ Receive daily updates directly in your inbox - Subscribe here to a topic.
♦ Download the UN News app for your iOS or Android devices.
sexual exploitation and abuse 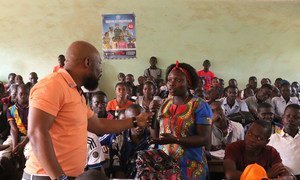