Photo: UNSMIL/Iason Athanasiadis
A view of old town in the eastern Libyan city of Benghazi. The city was the site of a car bomb attack that left three UN staffers, and other civilians, dead.

According to a statement from the UN Special Representative for Libya, Ghassan Salame, the staff members who died and were injured served with the UN Support Mission in the country, UNSMIL, which he heads. Scores of civilians were also injured by the explosion.

“This cowardly attack, which comes at a time when Libyans are out shopping in preparation for the Eid al-Adha, serves as another strong reminder of the urgent need for Libyans to stop fighting, set aside their differences, and work together through dialogue, and not violence, to end the conflict”, he said.

Keita: Positive that Prime Minister Serraj and General Haftar’s LNA have agreed to @GhassanSalame’s call for a truce for Eid al Adha in #Libya, to begin tonight. Hope both sides will genuinely abide, in good faith, to their public commitment. https://t.co/v8vRyXUOFU pic.twitter.com/uXmU4ixx7z

Mr. Salame added that “this attack will not discourage us, nor will it prevent us from carrying out our duties to bring about peace, stability and prosperity to Libya and its people.”

Mr. Guterres said in a statement issued by his Spokesperson that he condemned the attack “in the strongest terms”, extending his deepest condolences to the bereaved families. “He calls on the Libyan authorities to spare no effort in identifying and swiftly bringing to justice the perpetrators of this attack”.

“The Secretary-General calls on all parties to respect the humanitarian truce during Eid al Adha and return to the negotiating table to pursue the peaceful future the people of Libya deserve”, the statement added.

The UN has been attempting to broker a truce in fighting which erupted following a major assault in April on the southern outskirts of the capital Tripoli by the forces of the self-styled Libyan National Army (LNA) and forces loyal to the UN-backed Government of National Accord.

The Benghazi-based LNA has not been able to advance beyond the southern suburbs of Tripoli, but it controls large swathes of eastern and southern Libya, under the command of its leader, Commander Khalifa Haftar. Hundreds of civilians and fighters have been killed in the fighting, while more than a 100,000 have been forced to flee their homes.

Meanwhile, tens of thousands have crossed the border into Tunisia, seeking safety.

According to news reports, in the last 24 hours, both the Government and LNA had accepted a UN proposal for a ceasefire during the holy Muslim holiday of Eid, beginning on Sunday. UNSMIL issued a statement late on Saturday welcoming the agreement “by concerned parties to the principle of humanitarian truce”.

The UN Ambassador for Poland, which currently holds the Presidency of the Council for the month of August, Joanna Wroneka, said on behalf of the 15-member body that they condemned “in the strongest terms, the outrageous, deadly and totally unacceptable attack on the United Nations, that occurred today”.

She conveyed the Members’ deepest condolences to the families of the victims. “Those brave workers were operating under a mandate given by this Council in order to provide a more secure future, for the people of Libya. We commemorate their ultimate sacrifice, in the cause of peace.”

UN Photo/Evan Schneider
The Security Council observes a moment of silence during an emergency meeting on the situation in Libya, convened after a car bomb attack in Benghazi killed three United Nations staff members and injured two others, among scores of injured Libyan nationals.

UN has no intention ‘to evacuate’ from Libya: Bintou Keita

The UN Assistant Secretary-General for Africa, Bintou Keita, briefed the Council late on Saturday afternoon in New York, saying that the attack “serves to highlight the continued danger of terrorism across the country, and the limits of effective security control in the absence of one Government and one military, and police force, working across the country.”

She said it confirmed that the chronic violence and instability “is creating a vacuum easily exploited by radical elements that thrive on chaos and violence” and noted that the attack came in an area “supposedly under full control” of the LNA.

“The UN does not intent to evacuate from Libya” she said pointedly. “For the forseeable future, our place remains alongside the Libyan people, like our brave colleagues who gave their lives today.”

Ms. Keita expressed hope that both sides would abide by the Eid truce” in good faith, to their public commitment. Senseless and absurd violence needs to stop.”

She noted that Libya was incapable of pushing back against terrorism, “the tragedy of illegal migration” or the continued collapse of its economy, without pulling together in search of a common political solution through an agreed political process.

UNSMIL had worked hard in the days leading up to the truce. “It is essential that this truce is deepened and strengthened” through confidence-building measures such as prisoner exchanges, she urged, “and that the parties move quickly forward to an international meeting to recommit to a roadmap to transition the country from conflict, back to the peaceful, democratic process.”

She warned that “the continued brutal descent of southern Libya into chaos, and inter-communal fueds is a disturbing harbinger of what may ensue should the wider conflict persist.” 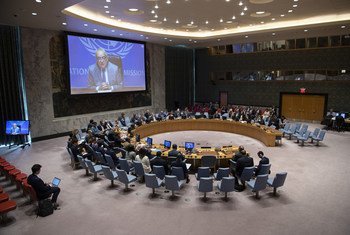 Fighting in Libya “shows no signs of abating”, the head of the United Nations Support Mission (UNSMIL), told the Security Council on Monday, painting a grim picture of worsening humanitarian conditions, and warning that the instability and influx of foreign weapons is fueling a proxy war in the north African country.