“Our two organizations share a common mission:  to prevent conflict, resolve disputes and act in a spirit of solidarity and unity”, he told the meeting on cooperation between the Council and the League (LAS). “We work together to expand economic opportunity, advance respect for all human rights and build political inclusion”, he added.

Responding to rising tensions in the Gulf, Mr. Guterres noted “with deep concern” the latest attack on oil tankers in the busy Strait of Hormuz on Thursday. “I strongly condemn any attack against civilian vessels”, he stressed.  “Facts must be established, and responsibilities clarified”.

At the Security Council today, @antonioguterres noted with concern the security incident in the Strait of Hormuz. "If there is something the world cannot afford, it is a major confrontation in the Gulf region" he said. https://t.co/X8Y9sTatzd pic.twitter.com/qZeBwDpzTm

Dozens of crew members were rescued from two oil tankers hit by explosions, following on from attacks against four tankers which were hit off the coast of the United Arab Emirates a month ago.

“If there is something the world cannot afford, it is a major confrontation in the Gulf region”, the Secretary-General spelled out.

Mr. Guterres explained that people around the world today expect “a new social contract for education, jobs, opportunities for young people, equality for women, respect for human rights and a fair share in national wealth”.

Within the challenges facing the Arab region, lie opportunities “to build on the words and intentions of the charters of our two organizations” to bring “real change”, the UN chief said.

The Secretary-General spoke about the UN’s commitment to a two-State solution to the Israeli-Palestinian conflict; the devastating toll on civilians in Syria after eight years of conflict; the impact of armed clashes in Libya; Sudan’s struggle to transition back to civilian rule; and the need to rebuild and overcome the trauma and impact of Da’esh, or ISIL, terrorist fighters in Iraq.

He also highlighted that Lebanon, “a country significantly affected by regional developments and the generous hosting of large numbers of refugees”, needs strengthening, in addition to underscoring that negotiations must be resumed to find a lasting political solution in crisis-torn Yemen.

Our two organizations share a common mission:  to prevent conflict, resolve disputes and act in a spirit of solidarity and unity UN chief

In Somalia, he urged the international community to “remain united to support political progress and the development of security institutions”, calling the Arab League “a key partner, both as an organization and through its individual members, for political support and economic development”.

On these efforts and more, “we continue to invest in building our engagement with regional and sub-regional organizations, including through regular consultations and collaboration”, he maintained.

He announced that a new UN Liaison Office to LAS in Cairo would become operational this month and lauded Egypt for its support and hospitality.

“I fully expect this Liaison Office, the first funded by the UN regular budget, will improve the effectiveness of cooperation between our two organizations”, he said.

“I intend to continue this fruitful engagement and deepen our collaboration to advance the vision set out in the UN Charter, in the interest of the peoples we collectively serve”, the UN chief concluded, offering his “full and active support” moving forward.

Secretary-General's remarks to the Security Council on Cooperation between the … 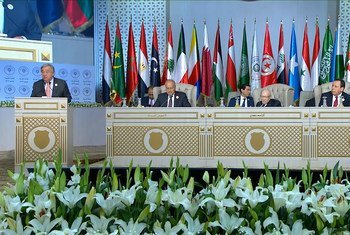