Cooperation between the United Nations and the League of Arab States has been critical to addressing the ongoing war in Syria, the search for a two-State solution for Israelis and Palestinians, and other challenges, the UN’s political affairs chief told a virtual meeting of the Security Council on Monday.

Under-Secretary-General Rosemary DiCarlo outlined how overall, engagement with regional bodies is a UN priority, including in areas such as preventive diplomacy, countering terrorism, peacebuilding and now COVID-19 response.

The League of Arab States has been crucial in augmenting our efforts to address various situations, including #Libya, #Yemen, #Syria and the Middle East peace process. My full remarks to the Security Council today: https://t.co/DfOuzQ3O98 pic.twitter.com/p2kgEXgggJ

“In the early days of the pandemic, (Arab League) Secretary-General Aboul Gheit and (UN) Secretary-General Guterres called for a global ceasefire to facilitate the delivery of humanitarian aid and open space for diplomacy. Since then, both the League and the UN have worked to implement this call”, she said.

Ms. DiCarlo said the past decade has been one of much tumult for the Arab region.  Conflicts in Libya, Syria and Yemen; a stalled Middle East peace process, and division among members of the Arab League have had an impact on instability and on development.

“The close cooperation between the United Nations, including our Special Envoys and Representatives, and the League has been crucial in augmenting our efforts to address various situations in the Arab world”, she stated.

She outlined the relationship between the two organizations, highlighting examples such as the Arab League’s support for UN efforts to broker a ceasefire in Libya, and for political solutions to the conflicts in Syria and in Yemen, where millions are facing the threat of famine.

“Despite our efforts, heightened tensions in the Persian Gulf region persist”, she said.

“The Secretary-General continues to call for restraint by all sides and stresses the need to avoid acts…or rhetoric, that may escalate tensions.  We urge all concerned, in the region and beyond, to opt for dialogue to address their respective security concerns.  The United Nations stands ready to support such measures.”

Hopes for the new US administration

The Arab League Secretary-General spoke of how the pandemic, together with continued conflicts and crises, have created a “dangerous mix” that has taken a heavy toll on the region.

Addressing the situation in the Middle East, Mr. Aboul Gheit told the Council the two-State solution appears more elusive than ever and must be reaffirmed.

“We look forward to the new American administration rectifying policies and procedures that are not useful and engage in a fruitful political process with the support of influential regional and international parties”, he said, speaking through an interpreter.

“This would give the Palestinian people renewed hope that the international community would stand by its side in its noble aspiration to achieve freedom and independence.”

The Arab League chief also spoke out against “interference” that has destabilized the region, affecting maritime routes critical to global trade and perpetuating conflicts.

“In Syria, five countries are interfering militarily in an apparent way”, he said. “Such (a) military and security situation not only undermines the prospects of a political settlement; it also has significant humanitarian repercussions which are equally serious.”

Turning to Yemen, he warned of the equally dangerous situation in Yemen and the looming humanitarian catastrophe brought on by years of fighting between government forces and Houthi rebels.

UN Special Envoy Martin Griffiths has worked to achieve a Joint Declaration providing for a ceasefire and confidence-building measures, he said, stating it was important to support him.

Mr. Aboul Gheit pointed to encouraging developments in Libya.  Rival administrations signed a ceasefire last year under the auspices of the UN, and a political dialogue has been launched, paving the way to elections in November.

“It is important, among other things, to start implementing the ceasefire agreement, including the removal of all foreign forces and mercenaries from all Libyan territories within the timeframes stipulated in the agreement”, he said.

“It is also imperative to reach a radical and lasting solution to the threat posed by armed groups and militias, without which the country will not enjoy any stability, nor will any agreement on the transitional phase, and the preparation for the upcoming elections, survive.”

The Arab League chief underlined other areas for cooperation elsewhere on the continent, including in supporting the transition in Sudan, preparing for elections in Somalia, and promoting peace, security and stability in the Horn of Africa.

♦ Receive daily updates directly in your inbox - Subscribe here to a topic.
♦ Download the UN News app for your iOS or Android devices.
security council|League of Arab States 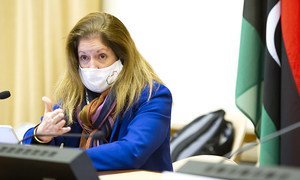 The UN Secretary-General has praised the breakthrough made by a key committee of the Libyan Political Dialogue Forum at the weekend, over an interim political leadership deal, ahead of nationwide elections at the end of the year.