Commissioner-General Pierre Krähenbühl told the Council it was “absolutely critical to avoid a breakdown of our food pipeline” and called on partners – 42 of whom increased their contributions to UNRWA last year after the United States withdrew funding - “to actively mobilize in support of our efforts”.

He was briefing via video-link, along with the UN Special Coordinator for the Middle East Peace Process, Nickolay Mladenov, on the overall political and humanitarian situation surrounding the Israel-Palestine conflict.

Mr. Krähenbühl said the severe hardship endured by Gazans after “successive armed confrontations, blockade and violence” had been compounded for more than a year by the thousands wounded and hundreds killed under fire from Israeli security forces during the demonstrations at the border fence.

“Every family in Gaza has been impacted and people speak of a level of despair that surpasses anything previously known to them”, especially in terms of what UNRWA calls the current “epidemic deterioration of mental-health conditions”, he said.

Mr. Krähenbühl said it was essential to open the next school year on time, in August, and rehabilitating schools to that end needed more funding.  Overall, $1.2 billlion is required through the year, he said, matching the amount mobilized last year, highlighting an upcoming pledging conference due to take place on 25 June in New York.

He implored the Council to do whatever it could, to end the political stalemate, as “every single day, we deal with increasingly severe human consequences of this enduring conflict”. He cited the inspiring story of 15-year-old UNRWA student Jameela Abu Jom’a, awarded the 2019 Inspirational Messages of Peace Contest” award, backed in part by the United States National Park Service. Her message will be displayed in an Atlanta park for a year.

“That is what you...have allowed us to achieve and preserve. For this you deserve the highest recognition”, he told the Council, calling on Member States to “protect this vital effort and sustain your collective mobilization, in support of dignity, stability and robust multilateralism”.

UN Photo/Loey Felipe
The Security Council Considers Situation in the Middle East, including the Palestinian question, 22 May 2019.

‘There are no shortcuts to sustainable peace’ - Mladenov

In his briefing, UNSCO chief Mladenov, said the escalation between Israel and militants across the border in Hamas-controlled Gaza of recent weeks, had “once again demonstrated the urgency of solidifying and expanding the existing understandings on the ground”.

“We must ask ourselves, how many more years will Palestinians in Gaza be forced to live on a pittance from the international community, under the control of Hamas, and suffer from Israeli closures?”

Mr. Mladenov asked how much longer Israelis would have to run for bomb shelters as Palestinian militants’ rockets “rain down indiscriminately from above?” He said the UN and partners had continued trying to mitigate the impact of the crisis in Gaza, but they were doomed to fail without resolving intra-Palestinian division, the blockade, and “charting a course towards the two-State solution based on long-standing international parameters”.

“There are no shortcuts to sustainable peace” he declared.

The Special Coordinator also noted that while the focus had been on the ebb and flow of the Gaza crisis, the occupied West Bank, including East Jerusalem, “is of growing concern to us”. A prolonged absence of any political progress through talks had coincided with deteriorating living conditions.

“This, coupled with violence, settlement expansion, demolitions of Palestinian property, and the persistent threat of further economic decline, are creating an explosive mix that could have serious security implications”, he added.

He condemned all attacks on Palestinian and Israeli civilians and called on all sides to refrain from violence. 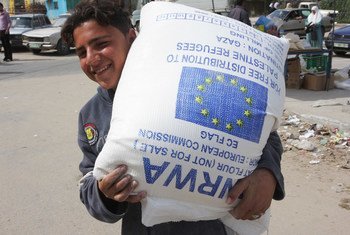 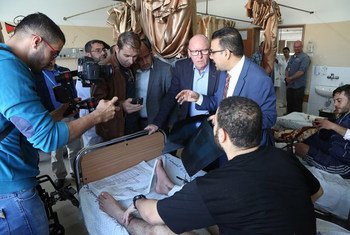