As a United Nations-baked intercultural forum drew to a close in Baku, Azerbaijan, the participants agreed that the journey to a better world, fuelled by the discussions over the past two days, including the important input by youth, will continue moving forward.

At the official closing ceremony of the 5th World Forum on Intercultural Dialogue, representatives from across the United Nations family of agencies weighed in on what had done well and what could be improved upon, noting that while dialogue within diverse communities may create tension, it also builds understanding.

Saying that the Forum’s fifth edition had come at “a crucial moment in today’s international arena,” Miguel Moratinos, High Representative for the UN Alliance of Civilizations (UNAOC), said that through intercultural dialogue, the world was moving towards a “new multilateralism”.

“We are all together here: young, middle class, civil society, the media and the private sector”, he said, praising the diversity of the gathering.

Because the Forum brought together different sectors of society, “Baku has been a success”, he added.

Observing that “multiculturalism is under attack”, he reminded teh gathering that in a world of “big data and artificial intelligence, where machines talk to each other, at the end of the day, we still need human contact”.

“The Baku Process does not end today, it must continue,” he underscored, referring to the intercultural dialogue initiative launched by Azerbaijan over a decade ago, and adding that “tonight we are leaving with hope and strength from these endeavours.”

For her part, Nada Al-Nashif, Assistant Director-General for Social and Human Sciences at the UN Educational, Scientific and Cultural Organization (UNESCO), acknowledged that while gains have been made, “we can do better”.

“We must think about the people who are not here, the youth who remain marginalized on vulnerable edges”, she said, stressing that: “Bridging the gaps between the like-minded is the next challenge.”

She detailed the significance of using inter-religious chairs, and hoped that in moving forward, youth would “continue more and more to participate”.

UN News/Elizabeth Scaffidi
Participants at the closing ceremony of the 5th World Forum on Intercultural Dialogue in Baku, Azerbaijan.

Manuel Butler Halter, Executive Director of the World Tourism Organization (UNWTO), said “the event put tourism in the right place, which was inspiring and motivating”.

He spoke about how although tourism was often seen from an economic perspective, it “also has a valuable social impact”.

“Tourism is meeting people,” he stressed. “It is an important driving force for intercultural dialogue because it makes more open-minded, creative and inclusive societies.”

Meanwhile, Abdulaziz Othman Altwaijri, Director General of the Islamic Educational, Scientific and Cultural Organization (ISESCO) asserted that “we must find remedies to the problems of extremism, radicalism, terrorism and discrimination.”

“Common ground brought us together and the way to save the world is to work together,” he concluded.

Abulfas Garayev, Minister of Culture of the Republic of Azerbaijan, observed that the Forum had been a success because, despite the ages, nationalities, religions or any other factors, the people involved used their actions towards achieving the same goal: “A better world.”

The 5th World Forum opened in Baku on 2 May and examined the critical role of intercultural dialogue as an actionable strategy for building human solidarity and helping localities counter the violence and discrimination in diverse communities.

Running under the theme Building dialogue into action against discrimination, inequality and violent conflict, it also host the 2nd High Level Panel of the Heads of International Organizations and the Ministerial Panel, aiming to build synergy and partnership among a diverse array of stakeholders on a common roadmap for assisting public, private and third sector organizations in building inclusive and sustainable societies through promoting intercultural dialogue and human dignity.

The Government of Azerbaijan, in partnership with UNESCO, UNAOC, the UN World Tourism Organization (UNWTO), the Council of Europe and the Islamic Educational, Scientific and Cultural Organization (ISESCO), hosted of the Forum.

Learn more about the UN Alliance of Civilizations (UNAOC) 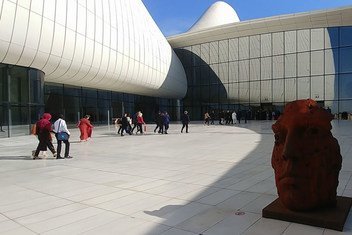