With the aim of meeting Sustainable Development Goal (SDG) 2, to eradicate malnutrition, Executive Director José Graziano da Silva said in his opening address to a meeting of the FAO Council executive, that thinking only in terms of those suffering weight loss, was outdated: “There is a steady growth in the levels of overweight (people) and obesity all around the world".

Mr. Graziano da Silva spelled out that "while hunger is circumscribed to specific areas, obesity is everywhere...we are witnessing the globalization of obesity".

As part of implementing FAO’s priorities over the next two years, he drew attention to upcoming key events that include a food safety conference organized by FAO, the World Health Organization (WHO) and World Trade Organization (WTO) later this month in Geneva; the launch of the UN Decade of Family Farming at FAO's headquarters at the end of May; and a meeting in June of the parties of the first-ever binding international instrument specifically addressing illegal, unreported and unregulated fishing, the FAO Port States Measures Agreement.

Today, at @FAO Council 161st Session I highlighted the importance of combatting all forms of malnutrition and promoting #innovation in #agriculture. https://t.co/Axu6CM48DG #CL161 pic.twitter.com/AotkagvsyT

The Director-General painted a picture of the UN agriculture agency’s commitment to partnerships. Whereas in 2012, 20 new partners contributed $28 million, FAO today has 100 new partners, contributing over $200 million.

Moreover, FAO's engagement in joint programmes and interagency platforms with UN agencies has also almost doubled since 2012, now representing a 100 per cent increase of contributions from the UN system, which account for $800 million.

A series of side events taking place in the margins of the session include the findings of the first report on the state of biodiversity for food and agriculture and addressing antimicrobial resistance in the context of the One Health approach.

In the run-up to electing a new FAO Director-General in June, candidates for the post — Ramesh Chand (India), Davit Kirvalidze (Georgia), Qu Dongyu (China) and Catherine Geslain-Lanéelle (France) — will address the Council on Thursday.

The 49 members of the FAO Council deal with the world food and agricultural situation and related matters and activities of the Organization, including the Programme of Work and Budget, administrative matters, financial management and constitutional questions.

♦ Receive daily updates directly in your inbox - Subscribe here to a topic.
♦ Download the UN News app for your iOS or Android devices.
agriculture|food and nutrition 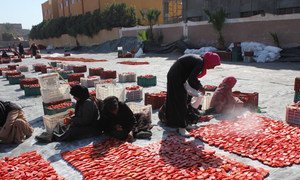 At a time of rapid urbanization, cities face challenges that are global in nature but require “the full engagement of local authorities” for multilateral solutions, the head of the United Nations agriculture agency told a special gathering of mayors on Tuesday.