UNICEF/Prinsloo
On 24 March 2019 in Mozambique, a boy stands near a destroyed house in an area that was flooded after Cyclone Idai made landfall in Beira.
25 March 2019
Humanitarian Aid

Efforts are continuing to reach all victims of Cyclone Idai in southern Africa where a senior relief chief has warned of a “water, sanitation and hygiene ticking bomb”, as the scale of the emergency continues to unfold, and the official death toll rises.

Latest reports indicate that more than 400 are now confirmed dead in Mozambique alone, with a further 300 fatalities in Zimbabwe and Malawi.

In Geneva, Elhadj As Sy, Secretary General of the International Federation of Red Cross and Red Crescent Societies (IFRC), said that an estimated 300 square kilometres of land had been destroyed or submerged when 150 kilometre-per-hour-plus winds and floodwaters swept across Mozambique, Malawi and Zimbabwe from the night of 14 March.
In partnership with the UN Office for the Coordination of Humanitarian Affairs (OCHA) and other UN agencies, IFRC is working with the authorities to provide assistance.

Trees as high as 10 metres ‘all under water’

“We flew over many - what used to be - forests but you could not even see the trees,” Mr As Sy said, describing his visit to Mozambique last Friday: “Trees as high as 10 metres were all under water”, he added, noting that many homes lay totally submerged beneath.

It’s not an exaggeration when I say that we are really sitting here on a water, sanitation and hygiene ticking bomb - IFRC's Elhadj As Sy

Needs are huge for all those affected by the disaster, made worse by the widespread poverty and lack of development in the affected countries.

Women and children are particularly vulnerable and suffering from “multiple deprevations”, Mr. As Sy explained, after his visit to Beira, the port city where Idai made landfall.

“Jumping up in your eyes, these kinds of disasters do affect disproportionately, women and children,” he said. “The worst is the children crying and looking for their parents, either because they’re just in a different shelter, hopefully, or unfortunately, they may have died.”

An initial IFRC appeal for around $10 million has been tripled after “we realized very, very quickly that this is not going to be anywhere near the scale and magnitude to make any difference”, Mr. As Sy said.

Praising the courage and professionalism of countless boat-owners who rescued thousands of people from flooded areas, the IFRC top official expressed concern over the lack of adequate shelter and basic services for survivors in Beira – Mozambique’s second-largest city, which was hit twice by the cyclone.

Six toilets for 3,000 sheltering in a half-flooded school

“They are not good, to be very honest,” he said, noting the conditions survivors’ faced in the city. “Some of them are even horrendous,” he said, adding that he had gone to a school where 3,000 were crammed into15 classrooms: “The school itself is half-flooded and there are only six toilets for all those people. So it’s not an exaggeration when I say that we are really sitting here on a water, sanitation and hygiene ticking bomb.”

Water levels in #Mozambique started to decrease, which will facilitate and accelerate the humanitarian response from now on. But some areas are still flooded.

In this picture we took yesterday, people are crossing a flooded road towards Buzi to reach dry zones. #CycloneIdai pic.twitter.com/2zpg3pUV9G

Amid concerns that the death toll is likely to rise as the floodwaters recede, the IFRC official insisted that everything possible was being done to get help to where it was needed most.

“We are making an extra effort to go to those that are hardest to reach and those that are most vulnerable,” he said. “And those of course, will include the elderly, female-headed households, the children, the disabled. These are often times, the ones that are left behind.”

Underlining the importance of ensuring that protection of victims is as important as providing food and safe water and sanitation facilities, Mr. As Sy explained that sexual exploitation was common in such situations – although he had not received any reports of abuse yet.

♦ Receive daily updates directly in your inbox - Subscribe here to a topic.
♦ Download the UN News app for your iOS or Android devices.
mozambique|Malawi|Zimbabwe 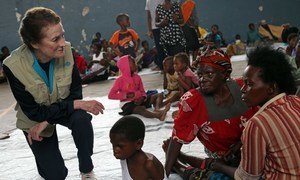 A week after the flooded Mozambican port of Beira was hit by Cyclone Idai, “aid agencies are barely beginning to see the scale of the damage”, the head of UNICEF said on Saturday, as she called for more international support to help quickly get relief to more than a million people across the country and prevent the possible spread of waterborne diseases like cholera. 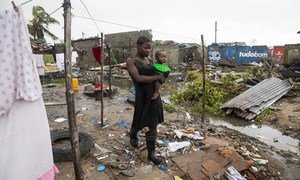 The world needs to step up support for the survivors of Tropical Cyclone Idai, the UN Secretary-General said on Friday, in a strong personal appeal as relief workers rush to provide aid to people stranded across the storm countries in southern Africa.