The latest assessment by UN Children’s Fund UNICEF, indicates that around 3,400 classrooms have either been destroyed or damaged, with 2,713 out of action in the Sofala area alone.

Although flood waters have begun to recede, the needs have not. Find the latest info on the #CycloneIdai response here ➡️➡️ https://t.co/dfymuDy9xl pic.twitter.com/DD90QYvj69

In some of the areas affected, schools will need extensive repair and rehabilitation after being converted into makeshift emergency shelters for children and families displaced by the huge storm, which barreled inland off the coast of Mozambique on 14 April, also causing damage and flooding across large areas of Zimbabwe and Malawi.

UNICEF is urging authorities to reconstruct schools in a more robust way, so they can withstand natural disasters in the future, and they are urging humanitarian partners involved in the mammoth recovery effort, to “continue working together to implement solutions” – such as establishing temporary learning centres – to get children back in school as quickly as possible.

“Any prolonged interruption in access to learning could have devastating consequences for children over both the short and long term”, said the agency. “Education is essential for helping children return to a sense of normalcy following a traumatic event, like a major cyclone, and for their long-term development and prospects.”

UNICEF is also concerned that the disruption will compound what were already low rates of school enrolment and “learning achievement” in Mozambique. iwith less than 20 per cent of secondary-school aged children currently enrolled.

Dropout rates could increase if families whose property or livelihoods have been negatively affected by the cyclone are forced to send their children to work to make ends meet.

Teachers have also suffered because of the cyclone, the agency notes, proposing short-term financial support for educators affected by the disaster to help them re-build their lives.

The needs in Mozambique remain massive, with 1 million children in need of assistance. UNICEF has launched an appeal for US$122 million to support its humanitarian response for children and families affected by the storm and its aftermath, in Mozambique, Zimbabwe and Malawi over the next nine months.

In immediate response to the storm, more than 14 countries, including five from Africa, deployed more than 100 assets to support the aid effort, said UN humanitarian coordination office, OCHA, including $14 million released from the Central Emergency Response Fund by humanitarian affairs chief, Mark Lowcock.

Food has been distributed from the first day of the disaster response, and more than one million people have been reached so far. More than 800,000 have been vaccinated against cholera, and more than 117,000 have received emergency shelter. 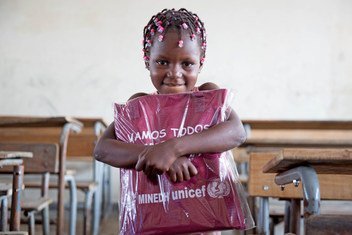 One month after Cyclone Idai devastated parts of Mozambique, Malawi and Zimbabwe, the United Nations Children’s Fund (UNICEF) appealed to the international community to  help some 1.6 million children still reeling from its impact. 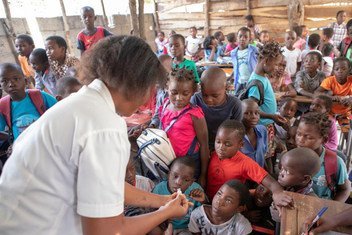 Nearly one month after Cyclone Idai slammed into the southeast African coast, the streets of Mozambique’s busy port city of Beira are “returning to life” as the search for survivors continues throughout neighbouring Zimbabwe, the International Organization for Migration (IOM) said on Tuesday.