An independent rights expert appointed by the Human Rights Council has called on the United Nations to “provide justice and remedies” to displaced people who suffered lead poisoning after being housed in UN camps on toxic wasteland in Kosovo.

The appeal on Wednesday by Special Rapporteur on human rights and toxics, Baskut Tuncak, follows a UN panel report on alleged human rights violations by the United Nations peacekeeping mission in Kosovo, UNMIK.

Among the cases reviewed by the Human Rights Advisory Panel was a complaint submitted by 138 individuals from the Roma, Ashkali and Egyptian communities that they suffered lead poisoning and other serious health consequences after their relocation to internally-displaced persons (IDP) camps in northern Kosovo, between 1999 and 2013.

Taking into account the panel’s findings, the office of UN Secretary-General António Guterres, announced in May 2017, the establishment of a Trust Fund to implement community-based assistance projects.

The statement said that the Secretary-General “believes that it is our shared duty to support the Roma, Ashkali and Egyptian communities in Kosovo and ensure that they receive the assistance that they need.  In this connection, the Organization will make every effort, in consultation with Member States, to mobilize the necessary resources in support of the Trust Fund."

However, to date, the Fund has not received any contributions from Member States, Mr. Tuncak maintained, adding that lead poisoning is believed to have contributed to the deaths of several children and adults.

“I am deeply disappointed by the inertia surrounding this case,” he said, “and that the solution offered by the UN is an inoperative and fundamentally flawed Trust Fund, which will neither provide justice, nor the necessary elements of an effective remedy for the victims.”

According to the Special Rapporteur, around 600 people lived in the camps -following their displacement during conflict between the then Federal Republic of Yugoslavia and Kosovo Albanian rebels who were supported by NATO airpower - between 1999 and 2013. Approximately half were children under the age of 14.

Reports of lead poisoning among residents were available as early as 1999, Mr Tuncak said in a statement, noting that protective measures to prevent lead exposure were taken for peacekeeping personnel in 2000.

Such action was not carried out for residents until 2006, however, he said.

“After sobering discussions with victims and their families and assessing the facts of this tragic case, the circumstances demand individual compensation and a public apology by the United Nations, in addition to community-based projects,” Mr Tuncak said.

“The UN’s integrity is at issue,” he continued. “It should reform its approach and mobilise the necessary resources to fully implement the recommendations of its own Human Rights Advisory Panel without further delay.”

In addition to recommending compensation payments to 138 individuals, the panel also called for a public apology for failing to comply with human rights standards.

“Decades ago, UNMIK did not fulfil its mandate to promote and protect the rights of these children and their families,” the Special Rapporteur said.” Nothing will replace what these victims have lost, but now the United Nations has an opportunity to do what it can to atone for past mistakes.”

UN holds dialogues to examine racism in its ranks 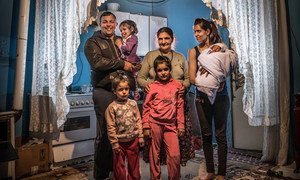 Taking into account an expert panel report on alleged human rights violations by the United Nations peacekeeping mission in Kosovo, the Secretary-General has decided to establish a Trust Fund to implement community-based assistance projects, his spokesperson said today.