In a statement released on Monday, Mr. Guterres said that he was “deeply saddened” by the loss of life and the “significant damage to people’s homes and livelihoods” caused by the heavy rains and subsequent flooding.

The UN Office for the Coordination of Humanitarian Affairs (OCHA) estimates that the flooding has affected some 115,000 people, particularly in the south of Malawi. In a factsheet on the floods released on Saturday, OCHA warned that the number of people affected is expected to rise, as assessment teams reach new areas.

The flooding has had a major impact on power supplies in Malawi: according to media reports, the country’s main utility company, EGENCO, has said that more than 80% of the country’s available hydro-electric capacity is down.

On Friday, Malawian President Peter Mutharika declared a State of Emergency in the areas hit hardest by the rains and flooding, which followed the formation of a “tropical disturbance” over the Mozambique Channel earlier in the week.

Search and rescue teams from Malawi’s Department of Disaster Management Affairs, have been working with local partners to deliver relief to affected people, including tents, plastic sheets, maize, rice, beans, blankets and kitchen utensils, according to a statement issued by the Ministry of Homeland Security.

The United Nations expressed its solidarity with the Malawian authorities, and committed to support them as they respond to the humanitarian needs of the population: the UN response has involved several main agencies. The World Food Programme (WFP) has deployed two boats to accompany the assessment and response; the UN Childrens’ Fund (UNICEF) is providing drones; and the UN Food and Agriculture Organization (FAO), in collaboration with the WFP, will support mapping using satellite imagery.

♦ Receive daily updates directly in your inbox - Subscribe here to a topic.
♦ Download the UN News app for your iOS or Android devices.
Malawi|flooding 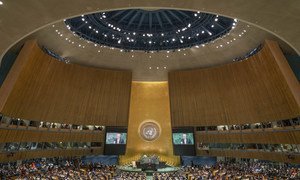 If there was one issue that was a recurrent theme on Tuesday on the first day of the United Nations General Assembly's annual general debate, it was the potentially catastrophic impact of climate change , from Secretary-General António Guterres’s opening address warning global Heads of State and Government  that “its speed has provoked a sonic boom SOS across the world”, to individual leaders highlighting their individual vulnerabilities. 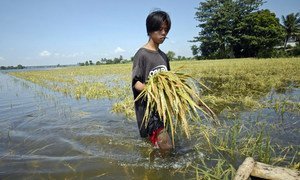