“Legalization of cannabis for recreational purposes, as seen in a small number of countries, represents not only a challenge to the universal implementation of the treaties and the signatories to the treaties, but also a significant challenge to health and wellbeing, particularly among young people”, INCB President Viroj Sumyai said, following the publication of the body’s latest Annual Report.

The report, coinciding with the 50th anniversary of the independent drugs control board, details the risks and benefits of the medical and scientific use of cannabis and cannabinoids.

With several US states and countries around the world having legalized marijuana for recreational use in recent years, it also looks in detail at the impact of that move, saying it can result in diversion to non-medical use and adversely affect public health.

Mr. Sumyai explained that there is “a great deal of misunderstanding about the safety, regulation and distribution of cannabis, particularly where recreational use has been legalized or medical cannabis programmes are expanding.”

INCB made clear its concern over legislative developments on the drugs non-medical use, which it maintains not only contravenes drug control conventions but also poses significant health risks.

“Our report’s focus on the use of cannabis and cannabinoids is coming at the right time, with recent legislative developments in a number of countries”, Mr. Sumyai asserted. INCB remains committed to constructive dialogue with governments of countries where recreational cannabis has been legalized.

“There is limited knowledge of the way the international drug control system works”, he added. “It has been designed by States to safeguard public health by preventing drug abuse while ensuring access to important medicines.”

Turning to pain management, the Board called on governments to end the unnecessary suffering of people who lack access to pain relief medicines. This, members say, will contribute to achieving Sustainable Development Goal (SDG) 3, to ensure healthy lives and promote well-being for all at all ages.

“People are unnecessarily suffering pain and undergoing surgical procedures without anaesthesia because of the lack of access to controlled medicines in some parts of the world”, Mr. Sumyai affirmed.

However, he also warned that oversupplying controlled medicines carries its own risks: “In other places, uncontrolled access is leading to diversion and abuse”, he continued. “We need to ensure more even access to these pain relief medicines.”

A special supplement aimed at marking “progress on ensuring adequate access to international controlled substances for medical and scientific purposes”, examines what is currently in the works to ensure adequate access, and how governments can be helped to move the situation forward.

The supplement includes INCB’s first global assessment of access to psychotropic substances, some of which are being prescribed to treat anxiety and epilepsy, which illustrates a growing global consumption gap.

The report notes that 80 per cent of people with epilepsy live in low- and middle-income countries, where essential anti-epileptic medicines under international control, are either very hard to obtain or unknown.

In low-income countries with a limited number of doctors, INCB recommends that more health-care professionals, such as specially trained nurses, be allowed to prescribe controlled-substances.

While there has been virtually no diversion from international trade in “scheduled precursor chemicals” to the black market over the past 30 years, Mr. Sumyai stressed that non-scheduled chemicals “pose a significant challenge”.

The Board suggests that international policy discussions should address “designer” precursors and new psychoactive substances to prevent these potentially harmful substances from reaching people.

“Today’s drug control challenges may seem daunting, but such challenges have been successfully overcome through cooperative efforts and political will”, he pointed out.

“That same spirit and commitment are needed today”, the INCB chief concluded. 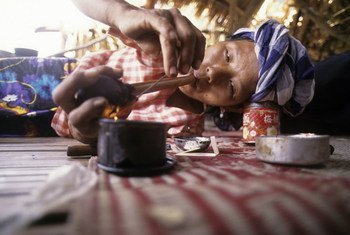