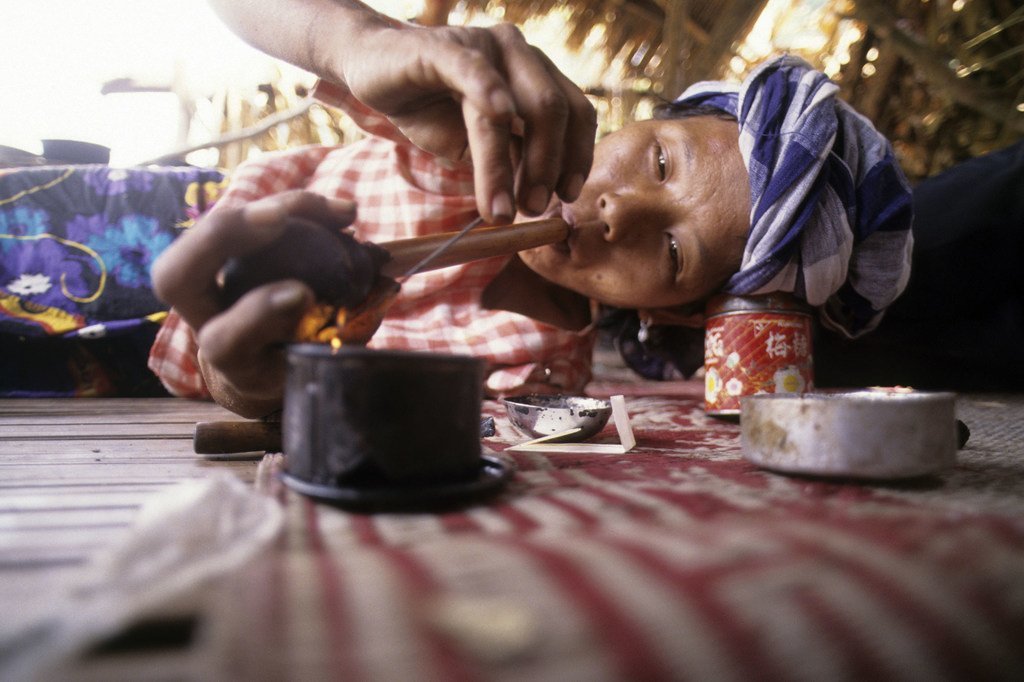 UN Photo/D. Gair
According to the INCB, only one in five women addicted to drugs are able to access treatment facilities. Seen here is a woman from a hill tribe in Thailand smoking opium (file).
1 August 2017
Health

Viroj Sumyai, who presented the Board's Annual Report on 6 July to the UN Economic and Social Council (ECOSOC), urged Member States to integrate gender perspectives in the elaboration of their drug policies to address this discrepancy.

According to the report, drug-related harms to women and the resulting consequences for communities are often “sorely under-studied,” and gender-disaggregated data on drug use are rarely collected.

“There are also inadequate budget allocations by Member States for the specific prevention and treatment of drug dependence and substance use disorders among women, who often do not have access to any assistance and suffer in silence,” the report pointed out.

In this context and to learn more about the work of the INCB, as well as the challenges before the international drug control regime, UN News spoke to Mr. Sumyai, a national of Thailand, during his recent visit to UN Headquarters.

Parts of the interview have been edited for brevity and clarity.

UN News: Can you tell us about the work of the INCB?

Viroj Sumyai: The board is composed of 13 members, elected in their personal capacity, by the Economic and Social Council. We are based in Vienna, Austria. Our primary responsibility is to monitor the compliance by the States parties to the three international drug control conventions: the 1961 Convention; the 1971 Convention on Psychotropic Substances; and the 1988 Convention against Illicit Traffic in Narcotic Drugs and Psychotropic Substances.

VIDEO: President of the International Narcotics Control Board, Viroj Sumyai, calls on governments to facilitate treatment for women dealing with substance abuse.

UN News: Women and drugs was a key subject in the Board’s latest annual report. What were the major concerns that you identified and how can they be addressed?

Viroj Sumyai: The biggest problem we see is the disproportionate impact on women in being able to access treatment facilities for substance use disorder. According to the data, only one in five women addicted to drugs are going to treatment facilities.

There are no specialized facilities for women to seek treatment. This creates a major obstacle both for them as well as their families, especially children that depend on women for care.

Looking at it from a sustainable development perspective, when governments are looking at issues such as livelihoods for their populations, they need to look at this issue too. It is also the right of women to seek treatment for substance use disorder.

And this is my main goal as the President of the INCB: I want to tackle the problem of lack of access to treatment for women who are addicted to drugs.

UN News: What are your thoughts on the abuse of opioid medications?

Viroj Sumyai: Over prescription of opioid medication, happening primarily in high-income countries like the US, Canada, countries in Western Europe, Australia and New Zealand, is creating a lot of problems. However, at the same time, there is the lack of access to these medications in low- and middle-income countries which in itself is causing a lot of issues. This is a major concern.

UN News: What are the biggest challenges for the international drug control system and how can they be overcome?

Viroj Sumyai: The biggest challenge, in my view, is for the people in the middle- and low-income countries who suffer from the lack of access to controlled medications due to misconceptions on the part of the State party, who feels that very strict controls over narcotic drugs or psychotropic substances is good and that it stops diversion of these drugs into illicit markets.

This is resulting in medical practitioners and health officials becoming reluctant to prescribe such medications – like morphine – to people who are in need and are suffering from deadly diseases and require the medicines to alleviate their pain. Similarly, persons with psychological illness are also suffering because they cannot avail psychotropic medicines they need.

IRIN
Despite eradication and education efforts, drug use, especially heroin, remains rampant in parts of Myanmar.

Viroj Sumyai: Many officials in law enforcement have raised the issue of overcrowding in prisons of those incarcerated on drug-related offences. According to the 1961 Convention, drug-abuse offence is a minor offence, and rather than incarcerating the drug user, getting them to treatment, rehabilitation and reintegration could be a better option. This would be a very good practice to follow.

UN News: Can you tell us about the collaboration between the INCB and other UN entities?

Viroj Sumyai: We are working closely with the UN World Health Organization (WHO) as well as with UNAIDS (the Joint UN Programme on HIV/AIDS), particularly to address the problems of those suffering with HIV and AIDS and are at the end stages of their lives, especially as they need morphine to lessen their pain.

With WHO, given their work with health professionals, we collaborate on building capacity regarding proper prescription of opioid medication and to ensure that these medicines are not over-prescribed. We also work with WHO in programmes on building capacities of national authorities on procurement of various types of medications.

UN News: What message would you like to convey to UN Member States?

Viroj Sumyai: I urge UN Member States, especially those that have the financial resources at their disposal, to support the INCB project building the capacity of national officials in low- and middle-income countries to tackle the problem of low access to opioid medication.

UN News: Is there anything you would like to add?

INCB is an independent, quasi-judicial expert body established by the Single Convention on Narcotic Drugs of 1961. It comprises 13 members, each elected by the UN Economic and Social Council, in their personal capacity to serve as independent experts.

♦ Receive daily updates directly in your inbox - Subscribe here to a topic.
♦ Download the UN News app for your iOS or Android devices.
narcotics|INCB