© UNICEF/UN0264260/Haro
Mebratu also known as ‘Tanki’ by his friends, is a 16-year-old boy from Eritrea. Music is one his greatest passions. He loves to listen to Eritrean traditional songs in his headphones found on his journey to Niger.
3 March 2019
Health

Many people live with unidentified hearing loss, often failing to realize that they are missing out on certain sounds and words. To address this problem, the World Health Organization (WHO) is urging people on this year’s World Hearing Day, held on March 3, to check their hearing.

Worldwide, some 466 million people have disabling hearing loss, and the WHO estimates that by 2050 that figure will almost double, affecting one in 10 people. The cost of unaddressed hearing loss is believed to be around US$ 750 billion.

To mark World Hearing Day 2019, WHO has launched a new mobile and web-based app called “hearWHO,” which allows people to check their hearing regularly, and intervene early in case of hearing loss. It can also be used by health workers to screen people in the community, and refer them for diagnostic testing if they fail the screening.

Users are asked to concentrate, listen and enter a series of three numbers when prompted. These numbers have been recorded against varying levels of background sound, simulating listening conditions in everyday life. The app displays the user’s score, and its meaning, and stores the outcome of the test so that the user can monitor hearing status over time.

Symptoms indicating the onset of hearing loss include a ringing sensation in the ear, known as tinnitus; frequently missing parts of a conversation; or a tendency to increase the volume of television, radio or audio devices.

The app is of particular benefit to people who are often exposed to high levels of sound, such as those who listen to loud music or work in noisy places; people who use medicines that are harmful to hearing; and people aged above 60 years.

In a statement released by WHO, Dr. Shelly Chadha, Technical Officer of the organization, said that "once lost, hearing does not come back. Through World Hearing Day, and with the support of this app, we encourage people to 'Check your hearing!' in order to help preserve this valuable gift that helps us to enjoy life."

♦ Receive daily updates directly in your inbox - Subscribe here to a topic.
♦ Download the UN News app for your iOS or Android devices.
World Hearing Day|WHO

‘Health is a right, not a privilege’ says WHO chief on World Health Day 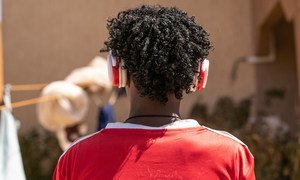 More than one billion 12 to 35-year-olds, risk irreversible hearing loss from exposure to loud sounds such as music played on their smartphone, UN health experts said on Tuesday, unveiling new guidelines to help address the problem. 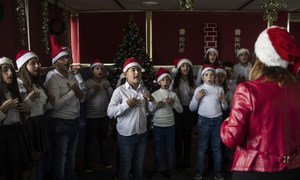 FROM THE FIELD: ‘Miraculous’ music made by hearing-impaired children

A group of deaf and hard-of-hearing Syrian refugee and local Lebanese children have sung in a choir in Beirut giving a performance that was “nothing short of miraculous,” according to conductor Pascal Khairallah.