With more than 500,000 people in Europe estimated to be unrecognized as a citizen of any country, the UN Refugee Agency (UNHCR) and the UN Children’s Fund (UNICEF) underscored that children without a nationality have limited access to basic rights and services, like education or healthcare, and can face life-long discrimination.

“Life is stacked against a stateless child right from the start”, said UNHCR’s Europe Bureau Director Pascale Moreau, adding that legal obstacles often mean their dreams are “dashed before they are adults, and their potential squandered”.

If you were invisible, what would you do?

2,100 children were registered as ‘stateless’ in Europe last year, our new report shows.

As the overall number of asylum-seeking children in Europe has grown since 2010, so too has the number of children identified as stateless. In 2017 some 2,100 children were registered as such, representing a four-fold increase compared to seven years earlier.

Basic rights and services, including education and healthcare, are denied to children without a nationality. Lacking official documents, they are also at greater risk of violence, trafficking and life-long discrimination. Moreover, along with their families, they are often exposed to arrest and detention.

“Every child has the right to a name and a nationality,” said UNICEF Regional Director and Special Coordinator for the Refugee and Migrant Response in Europe, Afshan Khan.

He underscored that Governments have a responsibility to adopt safeguards that prevent a child from being born stateless and “to provide legal aid and support to ensure every stateless child realizes their right to citizenship.”

The UN agencies said children born stateless are at a particular disadvantage, explaining that they cannot inherit their parents’ nationality due to gender discrimination and gaps in nationality laws. Children born in Europe whose births are not registered are another vulnerable group that includes minority populations, like the Roma.

And children from countries with known stateless populations who enter Europe as refugees and asylum-seekers are particularly defenseless.

While birth registration rates are high in Europe, UNHCR and UNICEF are pushing for information campaigns that target families most at risk, to help identify and register them.

Achieving legal identity for all through birth registration, is one of the goals of the 2030 Sustainable Development Agenda.

While UNICEF is working to ensure all children are registered at birth, UNHCR’s #IBelong Campaign aims to end Statelessness by 2024.

What solutions are there to help tackle statelessness?

♦ Receive daily updates directly in your inbox - Subscribe here to a topic.
♦ Download the UN News app for your iOS or Android devices.
statelessness 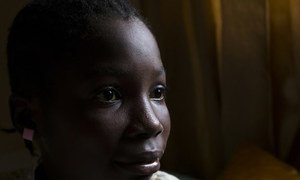 An estimated 12 million people may be victims of statelessness the impact of which is “immediate and can be dire”, the UN refugee agency (UNHCR) said on Tuesday.