The UN-brokered agreement between Athens and Skopje to formally recognize the “Republic of North Macedonia”, is a welcome, “historical” step that should be supported by regional and international Member States, António Guterres has announced.

In a statement following on from the entry into force of the Prespa Agreement between the two countries on Tuesday, the UN Secretary-General confirmed that he had received official notification of the development, which settles a near 30-year dispute between the two neighbours.

Mr. Guterres congratulated the two sides and Prime Ministers Alexis Tsipras, of Greece, and Zoran Zaev, of North Macedonia,  “on their determination in creating a forward-looking vision for relations between the two countries and reconciliation in the Balkan region and beyond”.

He added that he was “deeply grateful” to the UN’s longest serving envoy Matthew Nimetz of the United States, for his “unwavering commitment and dedication” in pursuing the deal.

The Prespa Agreement was signed by both countries on 17 June last year and ratified by their parliaments last month. It demonstrates that “even seemingly intractable issues can be resolved through dialogue and political will”, Mr. Guterres insisted.

Negotiations on the name dispute began in 1993 and have been led by the UN Secretary-General’s Personal Envoy Mr. Nimetz since 1999.

♦ Receive daily updates directly in your inbox - Subscribe here to a topic.
♦ Download the UN News app for your iOS or Android devices.
North Macedonia 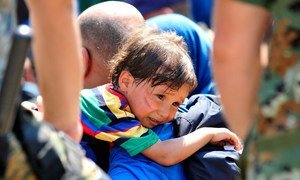 The United Nations Secretary-General António Guterres congratulated the Greek Parliament over its ratification of a name change for the former Yugoslav Republic of Macedonia on Friday, and commended the leaders of both countries for signalling the end to a naming dispute that has roiled the region for some 28 years. 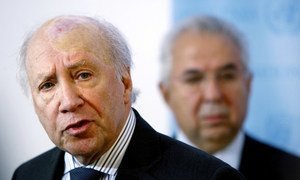