UN Publications/Steven Bornholtz
David Sheff, author of "Beautiful Boy", at the UN Bookshop for a discussion on his book where he shares the heartbreaking experience of survival, relapse and recovery of his son Nic.
24 January 2019
Health

The recognition of drug addiction as a disease was the focus of a panel discussion at United Nations Headquarters on Thursday. “Leaving No One Behind: the Opioid Epidemic as a Global Challenge”, was organized by the UN Office on Drugs and Crime (UNODC), to highlight the growing problem of addiction worldwide.

“Treating addiction as something criminal is contributing to this global crisis”, said Nora Volkow, Director of the US National Institute on Drug Abuse. Ms Volkow called on the importance of acknowledging the drug problem “from the perspective of the health system”.

“When we understand that people are ill, stigma goes away, and we know what to do, we treat them with compassion and we get them the best treatment we can”, added David Sheff, best-selling author and advocate, who has become an expert on the international opioid crisis, which has become a major public health emergency in the United States.

According to the latest World Drug Report launched by the UN agency in 2018, the non-medical use of prescription drugs is becoming a major threat to public health and law enforcement worldwide, with opioids causing the most harm and accounting for 76 per cent of deaths associate with drug-misuse.

Highlighting the importance of understanding “brain chemistry” and the role of education in prevention, Mr Sheff added that “much of the drug usage decision comes from stress”, which can result from many factors including family discord, stress at school, or violence, but also simply the day-to-day stress of growing up.

Looking at vulnerable age groups, the UNODC report found that drug use is highest among young people, with research suggesting that 12- to 17-year-olds are at particular risk.

“This idea that some kids have now in some communities that if they haven’t filled out their college resumes by the time they’re 12, they are going to fail in life, it’s a lot of stress on kids”, added Mr Sheff.

His memoir “Beautiful Boy: A Father's Journey Through His Son's Addiction”, where he shares the heartbreaking experience of survival, relapse and recovery of his son Nic, was recently turned into a film, screened on Wednesday at UN Headquarters.

Mr Sheff said that the idea that one has to practice ‘tough love’ to help someone dealing with a drug dependence is one “that is dangerous, because the consequences can be dire, including death. We shall intervene as soon as we can” he appealed, stressing that a whole range of treatment that is now available, it wasn’t 10 or 15 years ago.

Adding her personal experience to the discussion was Vicky Cornell, co-founder of the Chris and Vicky Cornell Foundation and wife of late rock icon Chris Cornell. Since her husband’s death in May 2017, Ms Cornell had become an expert and advocate on the whole issue of drug abuse, highlighting the importance of ending misconceptions about what is “a totally preventable and treatable disease”.

And we’ll have more on this story in our Lid Is On podcast next week, where we’ll be talking to David Sheff and Vicky Cornell about their work and what the UN can do, to help with the fight against drug addiction.

♦ Receive daily updates directly in your inbox - Subscribe here to a topic.
♦ Download the UN News app for your iOS or Android devices.
unodc|drugs

Illicit drug cultivation down, but mixed results on other narcotics goals – UN report 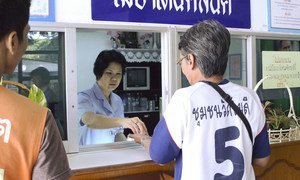 The scourge of opium-based drugs and cocaine are a bigger global threat to public health and law enforcement than ever before, according to the latest World Drug Report, released on Tuesday by the United Nations Office on Drugs and Crime (UNODC).