The scourge of opium-based drugs and cocaine are a bigger global threat to public health and law enforcement than ever before, according to the latest World Drug Report, released on Tuesday by the United Nations Office on Drugs and Crime (UNODC).

The 2018 Report provides an overview of the supply and demand of drugs as well as their impact on health.

The UN drug and crime fighting chief said the annual report was “a key pillar of our support, along with assistance to translate international obligations into action and capacity building on the ground to enable effective responses,” he added, in order to “protect the health and welfare of humankind.”

Beyond the production of the opium-based street drug heroin, pharmaceutically-produced opioids account for 76 per cent of non-medical, prescription drug deaths worldwide, with the powerful synthetic opioid Fentanyl an increasing problem in North America, and Tramadol a growing concern in parts of Africa and Asia.

Accessibility of both for medical use is vital for treating pain, but traffickers manufacture them illegally, causing considerable harm to health.

UNODC revealed that global seizures of pharmaceutical opioids in 2016 was 87 tons – with West, Central and North Africa accounting for the vast majority and Asian countries reporting just 7 per cent of the global total.

From 2016-2017, global opium production jumped by 65 per cent – the highest estimate recorded by UNODC since it started monitoring the drug’s production at the start of this century.

Turning to vulnerable age groups, the Report finds that drug use is highest among young people with research suggesting that 12- to 17-year-olds are at critical risk.

While the majority of people who misuse drugs are men, women have specific drug use patterns. The prevalence of non-medical opioids and tranquillizers is common to both, but women often begin abusing drugs at a later stage than men.

“UNODC is committed to working with countries to seek balanced, integrated solutions to drug challenges and achieve progress towards the Sustainable Development Goals,” Mr. Fedotov underscored in the report.

Secretary-General António Guterres also highlighted the dangers of growing drug abuse on Tuesday, saying that drug challenges are “among the most complex problems we face.”

In his message to mark the International Day Against Drug Abuse and Illicit Trafficking, he emphasized that the impact of illegal drugs - including on families, communities and sustainable development - underscored the need for international cooperation and effective law enforcement, in accordance with international standards, to stop organized networks and drug traffickers.

Mr. Guterres stressed that drugs must be addressed with “a holistic focus across many fronts” while expanding evidence-based approaches to prevention, treatment and support.

The UN chief cited the outcome document adopted by the 2016 General Assembly Special Session on the world drug problem, which outlines concrete steps for taking balanced action, rooted in the principle of shared responsibility.

"It is also flexible enough to allow countries to pursue national drug policies according to their priorities and needs,” he continued.

“I urge countries to advance prevention, treatment, rehabilitation and reintegration services; ensure access to controlled medicines while preventing diversion and abuse; promote alternatives to illicit drug cultivation; and stop trafficking and organized crime,” said the Secretary-General, adding that all these steps “would make an immense contribution to our work to achieve the Sustainable Development Goals.” 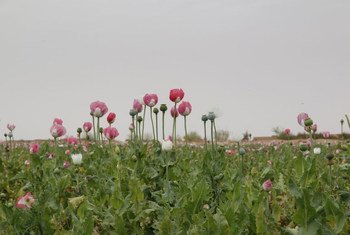 Opium poppy cultivation in Afghanistan reached a record-high last year, leading to unprecedented levels of potential heroin on the world market, the United Nations Office on Drugs and Crime (UNODC) said in a new report released on Monday.