UNICEF/Adriana Zehbrauskas
Pictured here are three girls in Progreso, Yoro, Honduras, ages 13 to 14, who are friends and victims of harassment at their school, for the purpose of sex trafficking. The person behind it is a 15 year-old student that works with a network that co-opts young girls against their will to work as prostitutes.
22 January 2019
Human Rights

The emotional and physical pain brought on by bullying can be excruciating, yet this behavior continues to abound in schools globally, according to a new report by the United Nations Educational, Scientific and Cultural Organization (UNESCO) that is calling for all children to have access to a "safe, inclusive” learning environment.

UNESCO’s report, Behind the numbers: ending school violence and bullying, released on Tuesday at the 2019 Education World Forum in London, reveals that nearly one-in-three boys and girls have been bullied at least once at school over the last month, and a similar proportion have been affected by physical violence.

Online and smartphone bullying on the rise

Physical bullying is more common among boys, while psychological bullying is more prevalent among girls. Meanwhile, online and mobile phone bullying is on the rise. Children perceived as different in any way from the norm, are the most likely to be bullied, with physical appearance being the most common cause followed by race, nationality or skin colour.

Bullying must be addressed because it significantly effects children’s mental health, quality of life and academic achievement, the report states.

Frequently bullied children are nearly three times more likely to feel shunned and more than twice as likely to miss school. Their educational-outcomes decline, and they are more likely to leave after finishing secondary school.

Not all bad, some progress made

Despite the gravity of the problem, some countries have made significant progress towards reducing, or containing, school violence and bullying.

"We are greatly encouraged that nearly half of countries with available data have decreased rates of school violence and bullying” said Stefania Giannini, UNESCO’s Assistant Director-General for Education. “This proves that through a combination of strong political leadership and other factors such as training, collaboration, reporting and monitoring, we can alleviate the climate of fear created by school bullying and violence.”

The UNESCO report is one of the UN educational agency’s contributions to the ‘Safe to Learn’ campaign, an initiative focused on ending violence in schools, so children can learn, thrive and pursue their dreams.

It brings together data from a range of global and regional surveys, covering 144 countries and territories in all regions, yielding the most up-to-date and comprehensive evidence on school violence and bullying.

“All children and young people have the right to safe, inclusive and effective learning environments", concluded Ms. Giannini.

♦ Receive daily updates directly in your inbox - Subscribe here to a topic.
♦ Download the UN News app for your iOS or Android devices.
bullying 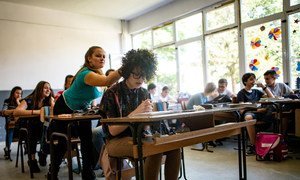