© UNICEF/Anush Babajanyan VII Photo
Peer mediators simulate a case of bullying at Branko Radicevic School in Mitrovica North, on May 30, 2018. Snezana Dzogovic, 16, (right) experienced bullying when she was 11. Since being supported by the UNICEF supported Domovik NGO, she has grown to be active as a mediator.
8 October 2018
Human Rights

“Being protected from bullying is a fundamental human right,” said Marta Santos Pais, Special Representative of the Secretary-General on Violence against Children.

At an event at UN headquarters in New York, co-organized with the Governments of Mexico and Lithuania, Ms. Santos Pais presented the key findings of the Secretary-General report and welcomed the “growing interest” from the world on the matter, applauding efforts made so far in terms of policy, law and advocacy to protect the safety of children.

Earlier this year, for example, Member States agreed on the adoption of a new indicator in the monitoring of the implementation of the Sustainable Development Goals (SDGs). Indicator 4.a.2 now measures the percentage of students who have experienced bullying in the past year, by gender, and for each contributing country.

Despite such encouraging signs, the Special Representative identified several key areas where improvement was needed for Governments and institutions.

First, she emphasized the importance of early childhood prevention and noted that the “parent-child relationship is a critical factor in predicting the risk of bullying in adolescence”. According to the report, today, 176 million children under-five, witness domestic violence on a regular basis and children who bully others are twice as likely to have been exposed to domestic violence than other children.

“Exposure to toxic stress, domestic violence and a violent family environment has an irreversible impact on the development of very young children,” she said, adding that “it contributes to normalize the use of violence”.

Today, approximately 30 per cent of adolescents in 39 countries in Europe and North America, admit to bullying others at school. 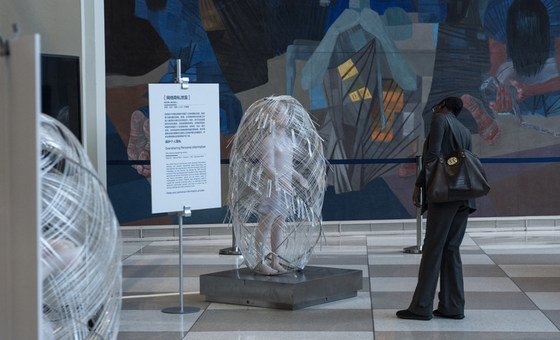 In addition, Ms. Santos Pais noted that teachers also play a great role in promoting “a culture of respect and safety” in schools and that sports environments can often become contexts where competitiveness leads to “humiliation, shaming and exclusion of those who fail to win”.

“Analyses of data from Ethiopia, India, Peru and Viet Nam reveal that violence in schools, including physical and verbal abuse by teachers and by other students, is the most common reason given for disliking school, and, significantly, it is associated with lower scores in mathematics and lower self-esteem,” the report highlights.

To address these negative impacts, experts and decision-makers are lacking sufficient data to form evidence-based strategies and programmes. However, the UN Educational, Scientific and Cultural Organization (UNESCO) has committed to tackling this gap and to producing an annual report to be released in January 2019 for the first time.

Some of the initial findings published already denote that physical appearance – such as being overweight or having non-conforming gender expressions – is the main driver for bullying. Race, nationality and skin color are also high on the list. In the report, religion was not highlighted as major contributing factor.

While the term “bullying” covers physical, psychological and sexual violence (understood in this context to mean sex-related mockery and gender-based discrimination), very little data is available on the psychological occurrence of it, and countries must do more to gain a better understanding of this issue. The UNESCO report shows that girls and boys are equally affected overall by bullying, but that boys are more likely to suffer from physical violence.

Cyberbullying on the rise

Cyberbullying, which can cause profound harm as it leaves a permanent footprint online and can quickly reach wide audiences, is on the rise, UNESCO’s report notes. In seven European countries overall, the proportion of children online aged 11-16 who’ve suffered cyberbullying, increased from 7 per cent in 2010, to 12 per cent in 2014.

Countries and institutions can adopt a wide variety of measures to help reverse these trends, including carrying out awareness-raising campaigns and teacher-trainin, adopting laws that clearly define bullying and pushing schools to implement concrete actions such as helplines for children.

The report of the Secretary-General will be presented on Tuesday to the Third Committee of the General Assembly so next steps can be determined.

“Children are eager to see action to bring this manifestation of violence to an end,” said Ms. Santos Pais. “And they deserve no less!”

Note: To draw attention to how deeply cyberbullying impacts the lives of millions of children every day, the UN has launched an innovative multimedia experience at its headquarters in New York, titled “Cyber Cocoon Kids”, highlighting the abuse that children undergo online.

♦ Receive daily updates directly in your inbox - Subscribe here to a topic.
♦ Download the UN News app for your iOS or Android devices.
Children|bullying|SDGs 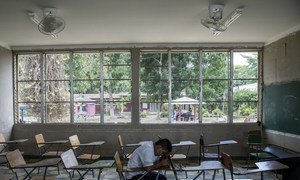 Violence at school an ‘unforgettable lesson’ faced by more than half the world’s children: UNICEF

Around 150 million school children aged 13-15 are the victims of violence from their peers, says a new report from the UN Children’s Fund, UNICEF. 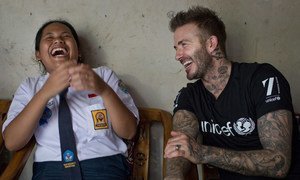 To help the United Nations Children’s Fund (UNICEF) tackle bullying in Indonesia – where one in five children have been physically attacked in school – David Beckham has visited the country to meet youth who have faced peer violence.