In a statement, the Secretary-General also encouraged all Congolese citizens to seize “this historic opportunity” to participate in the consolidation of the country’s democratic institutions.

Mr. Guterres also reminded those with a stake in the outcome of their “critical role” in preventing electoral violence, by refraining from any form of provocation and showing maximum restraint in what they say and do.

He also urged everyone to protect and ensure safe access to health facilities in Ebola affected areas, amid serious concerns, expressed by the UN health agency, that recent violence in the country’s east could reverse important gains made against the disease and increase transmission.

In a separate statement, Tedros Adhanom Ghebreyesus, the Director General of the UN World Health Organization, said that the agency was doing “doing everything possible” to assist those affected by the deadly Ebola virus disease in eastern DRC despite deteriorating security situation in the region.

Protests have erupted in three key towns – Beni, Butembo and Yumbi – following the Government’s decision to postpone elections there, amid fears of Ebola transmission, and an uptick in violence by armed groups.

In Beni, protests at Government buildings spilled into an Ebola transit centre, causing panic among both those seeking services as well as health workers.

Mr. Tedros said that it would be a “tragedy” for the local population, if the disease were to come back, as they have “already suffered too much.”

“Working side by side” with DRC health authorities and partners, the priority is to end the Ebola outbreak, he added, noting “we cannot afford to take a step back at this critical point in the response.”

Meanwhile, the head of the UN peacekeeping mission in the DRC, Leila Zerrougui, voiced regret over the postponement of elections in Beni, Butembo and Yumbi, on account of the Ebola outbreak.

“I was informed that there was a [health] concern with the hundreds of people passing by and touching a screen…I understand this concern,” Ms. Zerrougui told the UN mission’s radio station, Radio Okapi.

“Personally, I regret that the people of Beni [and] Butembo, who have suffered much for years…cannot vote,” she added.

To mitigate the threat of Ebola transmission during the elections, the UN mission – known by its French acronym, MONUSCO – is working to place hand-washing and cleaning facilities at the entrance to polling stations, to help allay fears. 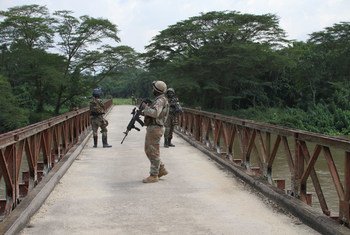