A new international agreement to forge a stronger, fairer response to large refugee movements known as the Global Compact on Refugees is expected to be endorsed by members of the UN General Assembly on Monday, 17 December to provide greater support for those fleeing their homelands, and for the countries that take them in, which are often among the poorest in the world.

It’s designed to provide a robust and systematic model to improve the lives of refugees and their host communities following two years of intensive consultations - which may sound familiar to anyone who has been following the progress of the global migration pact ( formally known as the Global Compact for Safe, orderly and Regular Migration) which was formally adopted in Marrakech last Monday, 10 December 2018.

UN News has put together this guide to explain the key difference between migrant and refugee status, and the differences between the two UN-backed compacts that are designed to improve the lives of everybody on the move.

We just heard the global compact on migration has recently been adopted. Why do we need another deal?

The New York Declaration that was adopted in September 2016 gave birth to two compacts: one on refugees and one on migrants. Although both are groups of people who live outside of their countries of origin, there are crucial distinctions between the terms “refugee” and “migrant."

Both agreements are voluntary in nature, and not legally binding instruments.

What’s the difference between a migrant and a refugee?

Refugees are persons who are outside their country of origin for reasons of feared persecution, conflict, generalized violence, or other circumstances that have seriously disturbed public order and, as a result, require international protection.  The refugee definition can be found in the 1951 Convention and regional refugee instruments, as well as the Statute of the United Nations High Commissioner for Refugees.

While there is no formal legal definition of an international migrant, most experts agree that an international migrant is someone who changes his or her country of usual residence, irrespective of the reason for migration or legal status. Generally, a distinction is made between short-term or temporary migration, covering movements with a duration between three and 12 months, and long-term or permanent migration, referring to a change of country of residence for a duration of one year or more.

“I’m a migrant but didn't have to risk my life on a leaky boat or pay traffickers. Safe migration cannot be limited to the global elite”, United Nations Secretary General António Guterres said.

As a Portuguese citizen, I am a migrant in New York. But I didn’t have to risk my life on a dangerous journey to get there. Migration must be an act of hope, not despair. https://t.co/4zVsrg3Y60 #ForMigration pic.twitter.com/y0aPzMoOBd

Does this mean the Refugee Convention is not fit for purpose?

“The Refugee Convention focuses on rights of refugees and obligations of States, but it does not deal with international cooperation writ large. And that’s what the global compact seeks to address”, explained the UN refugee agency’s (UNHCR) Assistant High Commissioner for Protection, Volker Türk.

The 1951 Convention does not specify how you share the burden and responsibility, and that’s what the global compact does. “It responds to one of the major gaps we have faced for decades”.

But why do we need a new international agreement?

At the end of 2017, there were nearly 25.4 million refugees around the world, more than half of whom are under the age of 18. Today, just 10 countries host 60 per cent of the world’s refugees. Turkey alone hosts 3.5 million refugees, more than any other country. Furthermore, the vast majority of the world’s refugees (85 per cent) live in developing countries that face their own economic and development challenges.

There are many falsehoods about the Global Compact #ForMigration – and about the world’s migrants. But we must not succumb to fear or false narratives. We must move from myth to reality. https://t.co/FQC4Ah4FT5 pic.twitter.com/XxzogEQXgq

Ten governmental donors (including the European Union) provide almost eighty per cent of UNHCR’s funding, for example, and more than two-thirds of UNHCR’s resettlement submissions go to just five countries. The gap between the needs of refugees and action to meet them is large and growing.

Who decided to create this compact? The UN, UNHCR?

· First, Member States adopted the comprehensive refugee response framework’, which sets out a wide range of measures to be taken by the international community when responding to a large-scale refugee situation.

· Secondly, Member States agreed to continue to improve international responses by working towards the adoption of a ‘global compact on refugees’ in 2018. They asked the United Nations High Commissioner for Refugees (UNHCR) to consult with Member States and a wide range of other stakeholders and propose such a compact. The proposed global compact on refugees was released on 20 July 2018.

How was the global compact on refugees negotiated?

It has been developed through an extensive multilateral process of consultation with Member States and other key stakeholders.

On 13 November 2018, the Social, Humanitarian and Cultural (Third) Committee of the UN General Assembly approved the resolution which affirms the refugee compact with overwhelming majority and has sent the text to the General Assembly plenary for adoption, scheduled for the morning of 17 December 2018.

How will the global compact on refugees work?

The global compact on refugees establishes the architecture for a stronger, more predictable and more equitable international response to large refugee situations.

Although not legally binding, it guides the international community in supporting refugees and countries and communities hosting large numbers through the mobilization of political will, a broadening of the base of support, and the activation of arrangements for more equitable and predictable burden- and responsibility-sharing.

“Refugees are an international concern, and a shared responsibility,” the UN High Commissioner for Refugees Filippo Grandi said. “In the compact, we will for the first time have a practical workable model, a set of tools that translates this principle into action.”

“Decades of keeping refugees apart, consigned to camps or on the margins of society are giving way to a fundamentally different approach – including refugees in national systems, societies and economies of their host countries for the time that it is necessary, and enabling them to contribute to their new communities and to secure their own futures, pending a solution to their plight,” Grandi explained, noting the that the global compact started with the generosity of these communities.

The global compact has four objectives:

1. Ease pressures on countries that host large numbers of refugees;

3. Expand access to third-country or refugees through resettlement and other pathways of admission;

4. Support conditions that enable refugees to return to their countries of origin

Will my country be obliged to welcome refugees?

Not more than it already is. The 1951 Refugee Convention focuses on rights of refugees and obligations of states. The global compact on refugees reaffirms those standards and principles.

The compact is not intended to create additional burdens or impositions on countries hosting large numbers of refugees, nor to modify UNHCR’s protection and solutions mandate. It seeks to build upon the international refugee regime that has been established over decades.

My country already hosts many refugees? Are we going to get help?

In specific large-scale refugee contexts, the global compact provides that a host State or country of origin, could request the activation by UNHCR of a Support Platform to assist its national response arrangements.

“What we want to achieve is a very quick galvanizing of support: political, financial, and resettlement support, so that countries – when they are faced with such a situation – feel that they are not on their own, that they are not isolated, or that no one cares”, Türk said. “That the international community cares about the people, but also the country that is affected. And it stands in solidarity, and acts in solidarity with them. That is really the purpose”.

What tangible difference will the compact make in the lives of refugees or the communities that host them?

UNHCR Assistant High Commissioner for Protection explained that if the compact is implemented we would see “better education for refugee boys and girls, as well as better access to health services for all refugees, and more livelihood opportunities”.  Host communities would engage differently with refugees, moving away from the encampment policies.

Host countries like Uganda, Rwanda, Iran, those in Central America, or Lebanon — with its infrastructure and health services enormously challenged by hosting a million refugees – would get the support they need not just from a humanitarian perspective but from a development cooperation perspective. “And that’s what is new”, Türk added.

Also, UNHCR aims to get more resettlement places and find more ways refugees can move to third countries – such as through family reunification, student scholarships, or humanitarian visas.

But if the compact is not legally binding, can it really make a difference?

It’s not binding, but the UN General Assembly will adopt the global compact. “Once that’s done, it demonstrates a very strong political commitment of all 193 Member States to implement it, even if it’s not legally binding”, Türk said, noting that “in today’s world, that’s how multilateralism is often done”.

Who’s going to fund all this?

The global compact embeds the response in a much broader partnerships approach. It looks at what the private sector, faith communities and international financial institution can bring to the table.

The World Bank has established a specific financial instrument for low-income countries affected by forced displacement – $2 billion for a couple of years – to help address the socio-economic impact of refugee flows into a part of a country. 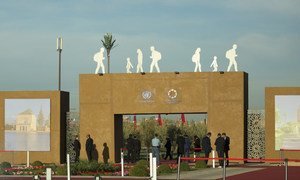