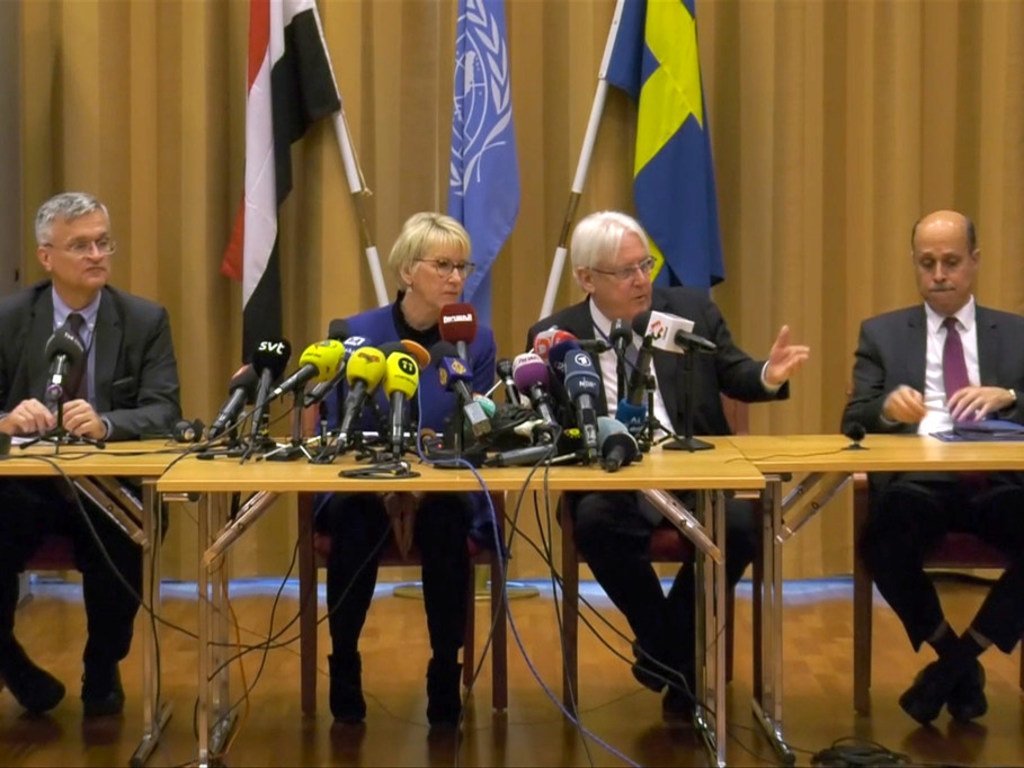 Special Envoy Martin Griffiths, the senior UN official facilitating the talks, said that the resumption of the political process, after two-and-a-half years, is an “important milestone” and the presence of the two delegations shows that they are ready to work together.

"Let us be in no doubt that Yemen’s future is in the hands of those of us in this room", he told delegates adding that "the country’s institutions are at risk, the fragmentation of the country is an enormous concern and we must act now before we lose control of the future of Yemen."

Later, he added that being together in the room demonstrated “to each other, and most importantly to the people of Yemen that you are ready to come together in the name of a peaceful political solution to the conflict,” Mr. Griffiths declared, addressing a press conference alongside representatives and the Swedish Foreign Minister, Margot Wallström.

The UN Special Envoy also highlighted that the calls – made by leaders from both parties in recent weeks – for reduction of violence and “de-escalation” of military operations, have formed an important backdrop for bringing the two sides together.

“Such a reduction of violence and restraint on the battlefield has a significant impact on the lives of Yemenis, but is also a signal to the people that we are here with serious intent to pursue a political solution,” he said.

Resumption of the political process, is an “important milestone” and the presence of the two delegations shows that they are ready to work together – UN envoy Griffiths, as ‘milestone’ talks get underway in #Sweden

Secretary-General António Guterres welcomed the consultations and urged the parties to make progress “by exercising flexibility and engaging in good faith and without pre-conditions”.

“The Secretary-General appeals to the warring parties to continue the de-escalation in Hudaydah and explore other measures to mitigate the life threatening economic and humanitarian situation,” said a statement issued by his Spokesman a few hours after talks commenced.

“He reminds the parties that a negotiated political settlement through inclusive intra-Yemeni dialogue is the only way to end the conflict and address the ongoing crisis.”

Agreement on exchange of prisoners

The day also witnessed the parties signing an agreement on the exchange of prisoners, including some under house arrest, announced Mr. Griffiths, prospectively allowing thousands of families to be reunited.

“The bar for success here, however, is higher,” continued the Special Envoy, noting the deteriorating situation in Yemen, including the country’s economy, health care, education and all aspects of life.

The grinding war has left over three-quarters of the country’s people reliant on international assistance and protection, and millions “severely” food insecure, marked by rates of very high acute malnutrition and excess mortality.

The resumption of the political talks, he continued, “offers an alternative to the narrative of conflict and it begins here.”

The dialogue will also be a “critical opportunity” to move the peace process towards a comprehensive agreement based on what diplomats refer to as the “three references” – the Gulf Cooperation Council initiative to try and create and deliver a peace framework, outcomes of the national talks, and relevant Security Council resolutions, including resolution 2216, stated Mr. Griffiths.

“In the coming days,” he said, the two sides “will have the opportunity, to discuss and make serious progress, I hope, on a framework for negotiations that sets the parameters for the peace agreement and the resumption of the political transition,” he added.

Efforts will also focus on Yemen’s deteriorating economy, violence in the key port city of Hudaydah - which is the crucial hub for food and aid imports on the Red Sea - and other parts of the country. Access and the resumption of flights in and out of Sana’a airport will also be discussed, as well as improving humanitarian access and making relief programmes more effective.

UNICEF/Clarke for UNOCHA
A student stands in the ruins of one of his former classrooms, which was destroyed in June 2015, at the Aal Okab school in Saada, Yemen. Students now attend lessons in UNICEF tents nearby.

‘Do not waver’ in efforts for political solution

Mr. Griffiths also told reporters that an advisory group comprising eight leading Yemeni women, as well as other Yemenis with experience in political issues, would be a key part of consultations moving forward, at his invitation.

“Already they are telling me how to move forward and what to do and what not to do,” he said.

Also at the talks will be the Ambassadors, accredited to Yemen, from a number of countries, as well as representatives from the international community.

The coming days are a milestone, it is an important event, a significant event, do not waver, let none of us waver in spite of the challenges we may face – Special Envoy Griffiths

Such wide support from the global community as well as the unity of the Security Council is an indicator of the “full” support for the peace process, added the UN Special Envoy, noting that the call is for an end to war as well as a resolution to the conflict, “a resolution to the issues that led to this war.”

Concluding his statement, Mr. Griffiths stressed that all those present in Sweden, for the talks, have “all expressed” their commitment to a political solution.

“The coming days are a milestone, it is an important event, a significant event, do not waver, let none of us waver in spite of the challenges we may face. Let us work with goodwill, good faith and with energy and conviction and we will deliver a message of peace to the people of Yemen,” he told those assembled.

Since the conflict escalated in 2015 with the beginning of an air war backed by a Saudi-led coalition - thousands of civilians, including many hundreds of children, have been killed as a direct consequence. Many more have lost their lives to malnutrition and deadly diseases such as cholera.

Across Yemen, more than 24 million people – over three-quarters of the population – are dependent on humanitarian assistance or protection, of whom over 8 million are severely food insecure and at risk of starvation.

Humanitarian aid agencies, which have been providing life-saving assistance to millions across Yemen, have underscored the urgency of talks, warning that the situation on the ground has deteriorated “dramatically” in recent months.

Mark Lowcock, the UN Emergency Relief Coordinator, returning from his latest mission to the war-torn country on 1 December described the situation as being on the “brink of a major catastrophe.”