A new study released by the UN Children’s Fund, UNICEF, shows that the deteriorating crisis in the Central African Republic (CAR), five years into the latest civil conflict to hit the country, has left practically every child needing protection from armed groups, which now control four-fifths of the country’s territory.

The report, “Crisis in the Central African Republic: In a neglected emergency, children need aid, protection – and a future”, finds that life has become harsher and more dangerous for children: thousands are trapped within armed groups, with thousands more, subject to sexual violence.

Beyond the direct threats associated with the conflict, the country is suffering from a severe humanitarian crisis: 1.5 million children now require humanitarian assistance, an increase of 300,000 since 2016; over 43,000 children below five years old are projected to face an extremely high risk of death due to severe acute malnutrition next year; and one in four children is either displaced or a refugee.

This crisis is taking place in one of the poorest and least developed countries in the world, and one of the most dangerous for humanitarian workers - UNICEF's Christine Muhigana

In addition, the number of attacks against aid-workers more than quadrupled – from 67 incidents in all of 2017, to 294 in just the first eight and a half months of 2018: “This crisis is taking place in one of the poorest and least developed countries in the world, and one of the most dangerous for humanitarian workers,” said Christine Muhigana, UNICEF’s Representative in the Central African Republic. “Conditions for children are desperate.”

Civilians bear the brunt of the armed conflict in CAR, which is driven largely by fighting between a dozen or so armed groups over cattle routes and lands rich in diamonds, gold and uranium.

The warring parties attack health and education facilities and their staff, together with mosques and churches, as well as sites where displaced people have taken shelter. Consequently, almost 643,000 people – at least half of whom are children – were displaced across CAR, and over 573,000 had sought refuge in neighboring countries as of September.

Displaced children are being hit by a malnutrition crisis, many with extremely limited access to health care, safe water and sanitation and - for children forced into the bush - conditions are even more dire.

CAR has the world’s second-highest newborn death rate and maternal mortality ratio, fewer than three out of five children make it through primary school, and almost half the population has no access to clean water. The country ranks 188 out of 189 countries on the UN’s Human Development Index, a composite indicator measuring life expectancy, income and education.

Despite the difficult and dangerous conditions in which its staff are operating, UNICEF is working to reach children in desperate need, in a variety of ways.

These include providing lifesaving food to 890,000 women and children to stave off malnutrition, immunizing children from deadly disease, providing emergency education and recreation, and aiding the recovery of children brutalized by armed groups.

Despite the major upsurge in fighting and displacement, only 44 per cent of UNICEF’s US$56.5 million funding appeal for 2018 had been met as of the end of October. “The children of the Central African Republic have been abandoned for too long,” Muhigana said. “They need attention and help now, and they will need it for the long run.” 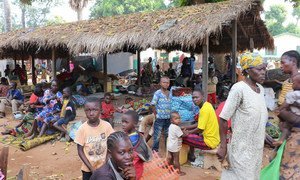 People’s needs in Central African Republic (CAR) have increased significantly in recent months, the top United Nations aid official in the country warned on Wednesday, amid worsening localized violence that has included the recent torching of two camps for displaced people. 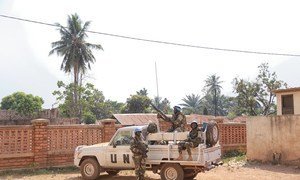