In the worst affected areas, only one-in-three students can continue their education and there are less than a quarter of all teachers in school.

“Most education personnel in Yemen have not received a salary in more than two years, and many have been forced to flee the violence or to find other opportunities to make ends meets,” he added.

The conflict has escalated over the last three years, following a Saudi-led military intervention against a Houthi rebel insurgency, at the request of the Yemeni Government.

Meanwhile, after visiting Aden, the seat of the Yemeni Government, and the capital Sana’a – which is held by the Houthis - Andrew Gilmour, UN Assistant Secretary-General for Human Rights, urged the warring parties to do “absolutely everything humanly possible” to prevent renewed fighting in Hudaydah.

In all his meetings, Mr. Gilmour underlined the international community’s demand to end the practice of recruiting children to take part in the fighting.

He underlined that it is unacceptable for any party to the conflict to deliberately create humanitarian suffering as a tactic of war and urged that delivery restrictions on emergency food and medical supplies be immediately removed.

Mr. Gilmour stressed the importance of accountability for international crimes and reiterated the need to restore law and order throughout the entire country.

In Aden, after meeting with Mothers of the Detainees who recounted harrowing and tragic tales of missing husbands, sons and brothers, he requested the government there, and the de facto authorities in Sana’a, to end unlawful detention and release all names of those in custody. He also called for improved detention conditions throughout the country.

Owing to the stigma attached to conflict-related sexual violence and the victims’ fear of retribution, Mr. Gilmour expressed his belief that it was significantly under-reported. He urged all sides to make it “crystal clear to absolutely everyone that any instances of rape and other forms of sexual violence would be rigorously investigated, and all perpetrators held accountable and punished.”

On behalf of the Office of the High Commissioner for Human Rights, Mr. Gilmour lauded Yemeni rights defenders who “despite enormous threats to their security and lives, continue to show extraordinary courage and compassion in order to investigate violations and campaign for improved rights.”

Ten days before the Universal Declaration of Human Rights marked 70 years, he sadly pointed out that “virtually every article in that noble document is being flagrantly and brutally disregarded.”

♦ Receive daily updates directly in your inbox - Subscribe here to a topic.
♦ Download the UN News app for your iOS or Android devices.
Yemen|Hudaydah 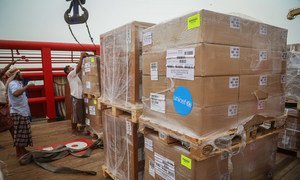 The United Nations should “actively and urgently” pursue negotiations for a leading role in aiding the humanitarian crisis in Yemen’s port city of Hudaydah, the top UN envoy for the war-torn country urged Friday.