The 2030 Agenda for Sustainable Development, the plan to transform the world agreed at the UN by 193 countries, cannot happen without “the ideas, energy, and tremendous ingenuity of the countries of the South,” said UN chief António Guterres on Wednesday, speaking at the opening session of the 2018 Global South-South Development Expo (GSSD Expo), alongside María Fernanda Espinosa, President of the General Assembly, and other senior UN officials.

The event, taking place between November 28 and 30 at UN Headquarters in New York, is the only expo offered by the UN system solely for the “Global South”, or Southern Hemisphere nations, benefiting from the support and participation of all UN specialized agencies, as well as strong support and partnership of other inter-governmental organizations and entities of the South.

Mr. Guterres pointed to several positive economic indicators which showcase “the enormous opportunities emanating from the countries of the South”: Southern countries have contributed to more than half of all global growth in recent years; Intra-South trade is at a record high, accounting for more than a quarter of all world trade; and the South represents one-third of all global outflows of foreign direct investment.

Ms. Espinosa added that south-south exports far outpaced total world exports between 1995 and 2016, growing at an average rate of 13 percent – compared to the global rate of eight percent – with the value of south-south trade increasing almost sevenfold, from $0.6 trillion to $4 trillion, over the same period.

However, Mr. Guterres pointed out that there remain many challenges to overcome: 10 percent of the world’s population still live in extreme poverty, and more than 700 million people are unable to meet their basic needs, problems which are exacerbated by climate change and rising inequalities.

The 2018 GSSD Expo is one of the last major opportunities for stakeholders – including Member States, UN entities, academia and civil society – to come together before a High-level United Nations Conference on South-South Cooperation, due to be held in Buenos Aires in March 2019, which will focus on the role of South-South cooperation in relation to the implementation of the 2030 Agenda.

Describing the expo as a chance to take stock, review lessons and identify new ways to advance the 2030 Agenda, Mr. Guterres urged delegates to seize the opportunity to “share the real, lasting changes taking place in the South,” and accelerate progress towards the Sustainable Development Goals. 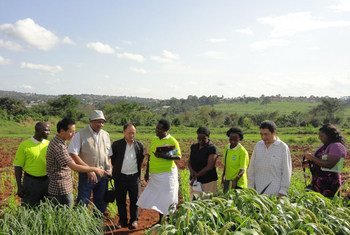 As part of the 40th anniversary of the International Day for South-South Cooperation, the United Nations drew together on Wednesday, more than 100 best-practices developed in the countries of the Global South, which embody the 17 Sustainable Development Goals (SDGs) and 2030 Agenda for Sustainable Development.