The Changsha Declaration aims to ramp up the efforts towards South-South Cooperation - an initiative working to eliminate hunger and malnutrition through the mutual sharing and exchange of good practices, resources, and know-how between countries of the “global south”.

At the forum’s conclusion, 26 countries and 11 international organizations signed on to the Declaration, which includes more information-sharing towards constructing common policies and programmes.

The forum coincided with the launch of a new report, jointly published by the Food and Agriculture Organization (FAO), the UN Children’s Fund (UNICEF), World Food Programme (WFP), and the World Health Organization (WHO), alerting of severe food shortages plaguing Asia and the Pacific.

The region faces risk of “a colossal human loss” if countries in the region do not recommit themselves to ending all forms of malnutrition, regional experts from the four specialized UN agencies warned in a joint press release on Friday.

One recent large-scale example of cooperation can be seen in Bangladesh, where hundreds-of-thousands of displaced mainly-Rohingya refugees fleeing violence, faced a major hunger crisis, effecting the whole region. China has been fielding experts and technicians to share knowledge in various technical areas, including aquaculture, crop production and livestock breeding to boost the country’s agriculture sector.

Around the world, climate-related disasters, limited access to safe water, and violence have contributed to a general rise in malnutrition.

Director-General for FAO Jose Graziano da Silva announced plans to establish an International Centre of Excellence for Agriculture Innovation and Rural Development in Beijing during the forum; a facility that will provide training in agriculture innovation and promote investment in rural areas in an effort to reach the first 2030 Sustainable Development Goal of zero hunger. 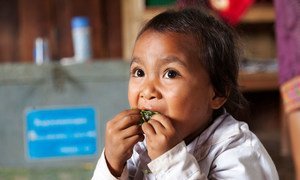 Well over half the world’s undernourished people live in the Asia-Pacific region, making it a critical part of the global push to end extreme hunger and malnutrition in line with the Sustainable Development Goal (SDGs), cautioned a new United Nations report on Friday.