UNICEF/NYHQ2012-0218/Romenzi
Syrian children shelter in the doorway of a house, amid gunfire and shelling, in a city affected by the conflict.

Referencing the Secretary-General’s recent country report on children and armed conflict in Syria as an eighth year of civil war looms, Panos Moumtzis said the findings reveal “a devastating increase in grave violations against children each year by all parties to the conflict,” and outside of the report, “overall numbers are considered to be much higher.”

Between November 2013 and June 2018, the Monitoring and Reporting Mechanism (MRM) on grave violations, established by the Security Council, cited the following key statistics for Syria:

Mr. Moumitzis explained the devastating humanitarian toll of the conflict on children.

“I am particularly concerned about ongoing reports of attacks on hospitals and medical facilities or personnel,” he said, highlighting that the Syria MRM verified dozens of such attacks within the first six months of 2018 alone.

“In some parts of Syria, entire education and health systems have been under attack, depriving children of their life-saving and life-sustaining protective environment.”

During the reporting period, the United Nations verified 12,537 grave violations against children, including gruesome deaths by stone-throwing and crucifixion.

Parties to the conflict

Reported recruitment and use of children in armed conflict continue to increase, said Mr. Moumtzis, adding that 90 per cent of young boys or girls forced into service, end up in a combat role.

“The protection of children must be included in future peace negotiations and stabilization efforts,” declared Special Representative for Children and Armed Conflict, Virginia Gamba.

“I call on all parties and those who can influence them to use this information, often verified at high- risk by our colleagues, in their efforts to bring a political solution to this terrible conflict,” she urged.

The UN has convened eight rounds of intra-Syrian talks on governance, election reform, and counter-terrorism tactics, while successfully dispatching aid convoys delivering food and vaccines to millions on the ground last year.

In February 2017, following dialogue with the United Nations, the Government of Syria released a national work plan to prevent and respond to underage recruitment, the report states.

Mr. Moumtzis said the “unprecedented and unacceptable” suffering endured by children begs the commitment of all parties to the conflict to “put children before politics.” 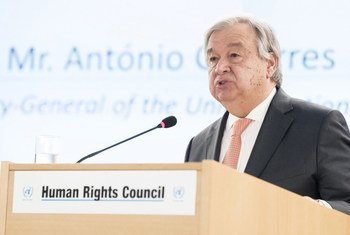