The United Nations Food and Agriculture Organization (FAO) has revealed that as some 700,000 people are dying each year from antimicrobial resistant infections, an untold number of sick animals are also suffering from diseases that do not respond to treatment.

Marking World Antibiotic Awareness Week, FAO stressed that farmers have a vital role to play in stemming the spread of what is known as antimicrobial resistance, or AMR, and called on them to boost hygiene practices in day-to-day farm operations.

"When we use antimicrobials excessively on farms, we're contributing to the spread of AMR, as resistant pathogens move into the environment through animal waste and farm runoff," said Juan Lubroth, FAO's Chief Veterinary Officer, on Wednesday.

"They can even contaminate our food systems and market chains, moving from the fields and stables to our tables," he noted.

According to FAO, one person dies every minute from a drug-resistant infection, a number that will only increase without global action. By 2050, the growing AMR threat will cost the global economy an estimated $6 trillion dollars every year.

AMR also has major implications for food safety, food security and the livelihoods of millions of farming households across the planet, who can ill afford production losses, the costs of caring for sick animals, or livestock casualties.

"If we are to feed a growing population and keep antimicrobials working," said Dr. Lubroth, "we need to invest in our farmers and food production systems to shift to more sustainable agricultural practices."

"Antimicrobial resistance is a concern for all of us," said FAO Assistant Director-General Bukar Tijani. "There are over seven billion consumers in the world, and food safety and quality are paramount to success in meeting many of the 17 Sustainable Development Goals."

Antimicrobial drugs are widely used for domestic animals, in fish farms and even on crops and across fruit orchards – sometimes as preventative measures to stave off infections and fatten animals faster.

Their improper use has contributed to an increase in the number of resistant microbes that, among other problems, renders treatments useless against some serious infections.

Calling farmers "one of the important frontline defenders" in the battle to contain the growing threat of AMR, Dr. Lubroth urged them to practice good farm hygiene, get veterinary advice before using antimicrobials and to exchange best-practices with neighbours.

He also called on farmers to demand quality animal feed without added antibiotics or other antimicrobials. 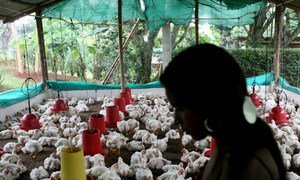 By 2050, some five million people could die each year in Asia alone due to resistance to antibiotic medicines or antimicrobials, according to UN agencies.