© UNHCR/Noor Elshin
Tripoli, Libya - Mohamed and Mariam seen outside the detention center from where they are being evacuated to Niger. 16 October 2018.
18 October 2018
Migrants and Refugees

The agency staff endured security challenges including having to operate under the threat of intermittent fire between rival militias.

Many of those evacuated have been held in Libyan detention centres for several months, living in wretched conditions and suffering malnutrition and poor health.

They are now being hosted under UNHCR’s Emergency Transit programme (ETM), pending more permanent solutions. UNHCR Chief of Mission in Libya, Roberto Mignone, said that for many of the Nigeriens, rescue meant the difference between living, and dying.

“These evacuations are a life-changing and life-saving escape for refugees trapped in detention in Libya,” he said. “Refugees and migrants in detention centres often suffer squalid conditions and are at risk of being sold to traffickers and smugglers.” 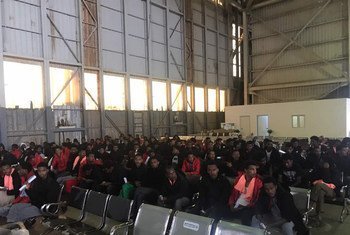 Many Nigerien migrants making their way to Europe are intercepted while attempting to cross the Mediterranean Sea, ending up in Libyan detention centres, and returning home with accounts of the horrific human rights abuses they have suffered.

This evacuation, the first from Libya since June, brings the total number of migrants and asylum seekers evacuated since December 2017, to 1997.

Another 85 refugees from Syria, Sudan and Eritrea were also flow to relative safety this week, with assistance from the UN migration agency (IOM), and will spend a few days at UNHCR’s Emergency Transit Mechanism before flying to Norway.

UNCHR welcomes the efforts of countries coming forward with offers to host refugees leaving Libya, and urges resettlement countries to speed up the process.

“People are being intercepted off the Libyan coast faster than we can evacuate them,” said Mr. Mignone. “We are deeply grateful for all those who have come forward with resettlement places but the simple truth is we need more evacuations, more often.”

♦ Receive daily updates directly in your inbox - Subscribe here to a topic.
♦ Download the UN News app for your iOS or Android devices.
Libya detention centers|UNHCR