Overcrowding in Greek island reception centres for refugees and migrants has made conditions for children there increasingly “dire and dangerous”, the United Nations Children’s Fund (UNICEF) said on Friday, warning that “severe emotional distress” affects many and that self-harm is a “possibility”.

In an appeal to the authorities to do more to speed up the transfer of vulnerable people to the mainland, Lucio Melandri, UNICEF Country Coordinator in Greece, noted that the number of vulnerable children arriving on the islands in 2018 compared with last year had risen by one-third.

Approximately 80 per cent of the 20,500 migrants and refugees now on the Greek islands are being sheltered in “unsanitary, overfilled” centres, Mr. Melandri said.

According to UN refugee agency, the majority of the arrivals on the Greek islands so far this year have come from Syria (32 per cent), Iraq (20 per cent) and Afghanistan (19 per cent).

More than 5,000 of those in the Greek island facilities are children, and the UNICEF official highlighted particular concerns about the island reception facilities of Moria on Lesvos and Vathi on Samos, which he visited last week.

“More children and families arrive every day,” he said. “The directors of the centres, both in Moria and Vathi, repeatedly expressed to us their concerns …due to the threat children face on daily basis. The staff are overwhelmed, services are overstretched.”

Speaking to journalists in Geneva, Mr. Melandri insisted that the Greek authorities and people “have done as much as they can” to help the vulnerable arrivals, but they could no longer cope.

Other EU States could help by pledging more resettlement places for children and by speeding up family reunification procedures, he added.

Under Greek law, refugees and migrants should spend a maximum of 25 days at a Reception and Identification Centre, but “despite tremendous goodwill and commitment”, UNICEF said in a statement that some children have spent more than a year completing arrival procedures.

“Conditions in these camps are horrible for any single child, and any refugee camps around the world is a horrible situation for the child,” Mr. Melandri said, adding that most of the children he had met had experienced the trauma of war.

In response to a question about children reportedly attempting suicide at Moria centre, Mr. Melandri replied that he was unable to comment on specific cases, although many were in severe emotional distress.

“I can assure to you that cases of self-harming, of violence against children, are unfortunately becoming a possibility, due to the conditions these children experience,” he said.

♦ Receive daily updates directly in your inbox - Subscribe here to a topic.
♦ Download the UN News app for your iOS or Android devices.
Migrants and refugees|Children 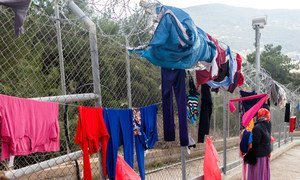