UNICEF/Alessio Romenzi
Migrants sit on mattresses laid on the floor at a detention centre, located on the outskirts of Tripoli, Libya, Wednesday 1 February 2017.
8 September 2018
Peace and Security

The UN Refugee Agency, UNHCR, has called on Libyan authorities to take action against  criminals targeting desperate refugees and migrants, amid reports that smugglers and traffickers in the country are impersonating Agency staff.

The Agency says that reliable sources and refugees have reported criminals using vests and other items with logos similar to that of UNHCR, at disembarkation points and smuggling hubs.

Genuine UNHCR staff are present at official disembarkation points in Libya, providing medical and humanitarian assistance, such as food, water and clothes, to refugees and migrants.

UNHCR is opposed to the detention of refugees and migrants, but has staff monitoring the situation at Libyan detention centres, aiding and identifying the most vulnerable.

However, the Agency insists that they do not engage in the transfer of refugees from disembarkation points to detention centres.

The reports of criminals impersonating UNHCR staff come as the situation for refugees and migrants detained or living in the Libyan capital, Tripoli, has dramatically deteriorated.

Following the violent clashes in Tripoli that erupted on 26 August, when tanks and heavy artillery were deployed in residential neighbourhoods, UNHCR has received reports of atrocities committed against refugees and migrants in Tripoli, including rape, kidnapping and torture.

The UN Support Mission in Libya, UNSMIL, says that 61 Libyans were killed, and nearly 160 were injured. Looting and crime were widespread, and the Ghassan Salamé, Head of the Mission, described the city as being “on the brink of all-out war”.

UNSMIL brokered a ceasefire between the major parties to the conflict, halting the fighting and restoring some order.

Thousands escaped the detention centres close to the clashes, in a desperate attempt to save their lives.

UNHCR is calling for alternatives to detention to be put in place, including the immediate use of the Gathering and Departure Facility in Tripoli, which will serve as a platform to find safety in third countries, and which will be managed by the Libyan Ministry of Interior and by UNHCR.

The facility has the capacity to host 1,000 vulnerable refugees and asylum-seekers and is ready for use. 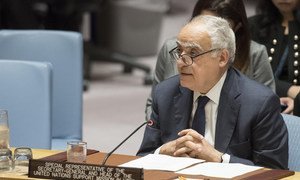 Libya has ‘lurched from one emergency to another,’ high-level UN official tells Security Council

The status quo in Libya is “untenable,” Ghassan Salamé, Head of the United Nations Support Mission in Libya (UNSMIL) told the Security Council on Wednesday.

The number of refugees and migrants reaching the European continent is going down, but the rate of fatalities has gone up dramatically, according to a new report from the UN refugee agency, UNHCR