UNHCR/Tarik Argaz
Members of the ethnic minority Tawergha community leave their makeshift homes in Tripoli, Libya, after the houses were demolished by a local militia.
4 September 2018
Peace and Security

Tripoli’s Meitiga International Airport, which had been closed since violence flared up, will also be opened under the deal.

It was signed by representatives of the Government of National Accord (GNA), military commanders, security apparatuses and armed groups present in and around Tripoli.

Scores of civilians had been killed and hundreds injured across residential areas of the Libyan capital since fighting escalated last week.

UNHCR spokesperson, Charlie Yaxley, told reporters in Geneva on Tuesday that the use of heavy weapons and shelling in civilian neighbourhoods had “caused death, destruction and displacement, and is of great concern.”

According to the UN human rights office (OHCHR), a humanitarian worker – trying to evacuate civilians trapped in a neighbourhood – was reportedly shot at, while one of the armed groups involved is alleged to have confiscated three ambulances.

UN agencies, such as the World Health Organization (WHO) and UNHCR, have stepped up their response, with WHO delivering trauma medicines for 200 critical cases, keeping another 2,000 more units on standby and deploying 10 mobile emergency trauma teams to areas where fighting is ongoing. Similarly, UNHCR is dispatching emergency items to families seeking shelter at a local school.

Doctors and other health staff [must] be allowed to move freely so that they can save lives without delay, and without risk to their own personal safety – Syed Jaffar Hussain, head of WHO  in Libya

In a statement prior to the announcement of the ceasefire, Syed Jaffar Hussain, the head of WHO operations in Libya, said the agency was “working with national health authorities and partners on the ground to respond to increasing health needs, but roadblocks remain a major challenge to the delivery of health care, especially ambulances that are unable to reach the injured.”

“With greater numbers of injured civilians expected, it is imperative that doctors and other health staff be allowed to move freely so that they can save lives without delay, and without risk to their own personal safety,” he added.

There were also reports that a migrant detention facility was hit, causing great concern over the safety of migrants and refugees.

“We are closely monitoring the situation and coordinating with the Libyan Directorate for Combatting Illegal Migration and UN agencies, and advocating for all refugees and migrants to be relocated to a safer place,” said UNHCR’s Mr. Yaxley.

According to UN reports, there are about 8,000 arbitrarily detained migrants trapped in detention centres in areas where fighting had been taking place, without access to food or medical treatment. Furthermore, there are reports that some migrants, released from detention, have subsequently been captured by armed groups and forced to work for them. 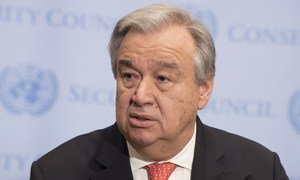 Condemning the escalation of violence in and around the Libyan capital, Tripoli, United Nations Secretary-General António Guterres has called on all parties to immediately cease hostilities and grant humanitarian relief to those in need.