UNHCR/Sebastian Castañeda
Hundreds of Venezuelans queue at the Binational Border Assistance Center (CEBAF) waiting to enter Peru through the Ecuadorian border. The queues can take up to to ten hours to clear and some people are forced to stay the night.
23 August 2018
Migrants and Refugees

As hundreds of Venezuelans continue to pour into neighbouring countries due to social and political upheaval at home, the heads of the United Nations refugee and migration agencies called for greater international support to meet the most basic needs of the displaced.

As of June, there were about 2.3 million Venezuelans living abroad. Nine out of 10 have sought refuge in countries within Latin America, especially Ecuador, Peru, Colombia and Brazil. The trends are accelerating with a total of about 2,700 to 4,000 arrivals in those neighbouring countries daily.

According to the UN Office for the Coordination of Humanitarian Affairs (OCHA), close to half a million have fled to Ecuador in 2018 alone.

The UN High Commissioner for Refugees (UNHCR), Filippo Grandi, and the Director General of the UN migration agency (IOM), William Lacy Swing, applauded neighbouring countries for hosting so many Venezuelan asylum-seekers in recent months and years, but expressed concern over recent developments, such as new passport and border entry requirements in Ecuador and Peru, or changes to the temporary stay permits for Venezuelans in Peru.

“We commend the efforts already made by receiving countries to provide Venezuelans with security, support and assistance,” Mr. Swing told the press in Geneva on Thursday. “We trust that these demonstrations of solidarity will continue in the future.”

Mr. Grandi explained that while they “recognize the growing challenges” associated with the large-scale arrival of migrants and refugees, “it remains critical that any new measures continue to allow those in need of international protection to access safety and seek asylum”.

The two UN agency chiefs stressed their concern for the most vulnerable, including adolescent boys and girls, women, people trying to reunite with their families, and unaccompanied and separated children who are unlikely to be able to meet documentation requirements and are therefore more at-risk of facing exploitation, trafficking and violence.

Various UN agencies and their partners are working to support national governments’ response plans and address the needs of those arriving, in what has become one of the largest population movements in Latin American history.

“This current situation underlines the urgent need to increase international engagement and solidarity” to address “the most pressing humanitarian needs”, and ensure that “safe transit is guaranteed and social and economic integration can be provided in line with larger development strategies,” read the joint UNHCR/IOM statement.

The two agencies reminded that following the commitments of the 2016 New York Declaration for Refugees and Migrants, “timely and predictable support by the international community is needed for fairer sharing of responsibilities and to complement the efforts of host countries”.

♦ Receive daily updates directly in your inbox - Subscribe here to a topic.
♦ Download the UN News app for your iOS or Android devices.
Venezuela|peru|ecuador 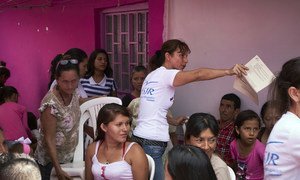 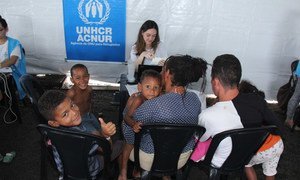 Some 117,000 Venezuelans have claimed asylum already this year — more than for the whole of 2017 — the UN refugee agency (UNHCR) said on Tuesday, after welcoming a decision by the Brazilian Supreme Federal Court to reverse the closure of the country’s border with its northern neighbour.