© UNHCR/Paul Smith
A family of Venezuelan children and their older Colombian-born relatives stand outside their wooden house in Barrio Camilo Daza in the city of Cúcuta, Colombia. Mother of four, Aide Caceres (far left) recently brought her children here because of the situation in Venezuela, but is unable to access health and education for them as they are undocumented Venezuelans.

According to the UN office for humanitarian coordination (OCHA), most of the 3 million are currently hosted by countries in Latin America and the Caribbean, accounting for about 2.4 million refugees and migrants from Venezuela. Colombia has the highest number with over one million, followed by Peru with half a million, Ecuador with some 220,000, and Argentina with 130,000.

In addition to South American countries, countries in Central America and the Caribbean also recorded increasing arrivals of refugees and migrants from Venezuela. Panama, for example, is now hosting 94,000 Venezuelans.

Commending these countries’ “open-door policy,” Eduardo Stein, who heads the joint effort on behalf of refugee agency UNHCR and migration agency IOM for Venezuelan refugees and migrants, noted however that “their reception capacity is severely strained,” and is “requiring a more robust and immediate response from the international community if this generosity and solidarity are to continue.”

UNHCR Special Envoy Angelina Jolie, noted during a recent visit to Peru, that every Venezuelan she had met described the situation in their country as “desperate,” adding that she heard “stories of people dying because of a lack of medical care and medicine… and tragic accounts of violence and persecution”.

With these rising numbers of families fleeing Venezuela, their basic needs have increased, along with the communities hosting them.

Governments in the region are leading the humanitarian response and working to coordinate efforts based on the Quito Declaration for example, adopted in September and which has been an important step towards a regional approach to scale up the response and harmonize policies.

To support this response, the UN and its partners have appealed for US$220 million to address the needs of 406,000 people across Colombia, Ecuador, Peru and Brazil. The UN Central Emergency Response Fund (CERF) allocated $17.2 million earlier this year.

In addition, a humanitarian regional response plan is underway to be launched in December, with a focus on four areas: direct emergency assistance, protection, socio-economic and cultural integration and capacity-building for governments of receiving countries.

The governments from the region are scheduled to meet again in Quito on 22 and 23 November to continue moving the regional process further.

Special residency card saves life of Venezuelan in Peru
♦ Receive daily updates directly in your inbox - Subscribe here to a topic.
♦ Download the UN News app for your iOS or Android devices. 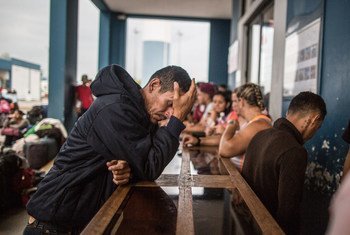 As hundreds of Venezuelans continue to pour into neighbouring countries due to social and political upheaval at home, the heads of the United Nations refugee and migration agencies called for greater international support to meet the most basic needs of the displaced. 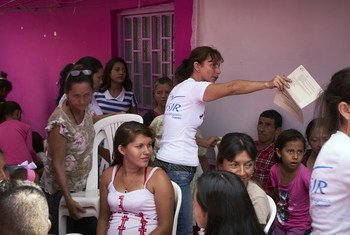