“We can all learn from those who have experienced terrorism,” Secretary-General António Guterres remarked, referring to the multimedia display mounted especially to mark the day, Surviving Terrorism: Victims’ Voices.

“Communities around the world are demonstrating their resilience,” he declared, and “countering terrorism and violent extremism in their everyday lives, in their schools and in their places of worship,” he continued.

He pointed to their consistent call for more information to be shared during investigations, more victim-centered criminal processes, and for justice, otherwise we would be “failing in our responsibility to humanity.”

“When we lift up the victims and survivors of terrorism, when we listen to their voices, when we respect their rights and provide them with support and justice, we are honouring our common bonds, and reducing the lasting damage done by terrorists to individuals, families and communities,” Mr. Guterres explained.

Calling the exhibition “a unique contribution to that goal,” the Secretary-General explained that for the first time, “we have gathered in one place the testimonials of individuals whose lives have been affected by terrorism, to hear first-hand how this has impacted their lives, and what they have achieved.”

“We are here for you and we are listening to you,” he underscored. “Your voices matter. Your courage in the face of adversity is a lesson inspiring us all.”

He called the International Day paying tribute to the victims, which will be marked on 21 August, “an opportunity to recognize, honour and support victims and survivors, and to lift up the voices of those left behind.”

Mr. Guterres pointed out that it coincides with the anniversary of the first time the Organization was targeted by terrorists, 15 years ago, when the UN Headquarters in Iraq was bombed and 22 people lost their lives, many of them UN staffers, including Special Representative and human rights chief, Sergio Vieira de Mello.

“Earlier this year, I visited Mali, where terrorists threaten our peacekeepers and civilian staff on a daily basis,” he said, underscoring that although the survivors’ stories often go untold, they must, for their entire lives, live with the burden.

He spoke more recently of last Wednesday’s “despicable attack on an education centre in Kabul, targeting children,” as something that “shocked us all.”

“It is time to stop and to listen to the victims and survivors of terrorism,” he emphasized. “It is time to raise up their voices and recognize the impact terrorism has on their lives.”

“The United Nations stands in solidarity with you,” he concluded.

One of the voices featured in the exhibition, Sayad Mushtaq Hussaini, shared his experience working as a journalist in Afghanistan last December, when an attacker detonated explosives during a panel discussion he was attending, on the protection of civilians.

“This was a bloody attack against freedom of speech, which claimed the lives of 42 and injured over 75 others,” he recalled. “The victims were all ordinary civilians, including boys, girls, mean and women.”

He described the pain of “that dark day,” both physically and the sorrow for the friends who perished and requested the General Assembly to pay more attention to terrorist victims and their timely medical treatment, “as the Afghan Nation is suffering a lot by the ongoing terrorist attacks.”

♦ Receive daily updates directly in your inbox - Subscribe here to a topic.
♦ Download the UN News app for your iOS or Android devices.
terrorism|exhibition 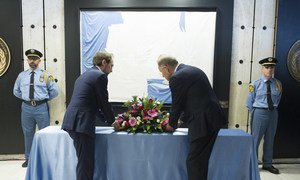