UNICEF/Raoni Libório
In inland Bahia, a northeastern state in Brazil, UNICEF and its partners found Yasmin and her sisters and took the girls to school.
3 August 2018
Human Rights

“People living in poverty, and other marginalized groups, are disproportionately suffering as a result of the stringent economic measures in a country once considered as an example of progressive policies to reduce poverty and promote social inclusion,” said a statement released by a group of seven UN human rights experts on Friday.

According to the experts, data recently made available, reveals a rise in child mortality rates for the first time in 26 years, attributable in part to the Zika disease virus epidemic and economic crisis of recent years.

This is a serious concern, especially considering public health system budgetary restrictions and other social policies that compromise the State’s commitment to guarantee human rights for all, especially children and women, the experts elaborated.

“Some of the financial and fiscal decisions made in the last years affect the enjoyment of several rights, including to housing, food, water, sanitation, education, social security and health, and are worsening pre-existing inequalities,” they added.

While the Government has underlined various measures to alleviate the adverse consequences, the experts find them largely insufficient.

“Women and children living in poverty are among those hit hardest, as are Brazilians of African descent, rural populations, and people living in informal settlements,” said the experts. “We regret that efforts in relation to targeted policies addressing systemic discrimination against women have not been sustained.”

They stressed that austerity measures, which have been popular across the world since the 2008 economic crisis, should never be the only -  or first - solution to tackling economic problems.

They explained that economic crises do not justify cuts to services and social rights.

“Austerity measures should be taken only with the most careful analysis of their impact, in particular as they would affect the most disenfranchised individuals and groups,” they stressed. “They must be considered only after a comprehensive human rights impact assessment.”

The experts added that such an assessment should consider less harmful policy alternatives, like raising taxes for the richest before placing bigger burdens on the poor: “Steps to reduce public debt and to regain not only financial but also social sustainability, should also be considered,” the experts stressed.

Once a champion in the fight against hunger and malnutrition, Brazil, is dramatically reversing major policies on food security; cutting housing; and, according to 2018 forecasts, reducing water and sanitation. Moreover, public spending is expected to remain capped for 20 years, further underscoring the need to review economic policies with a human rights lens.

♦ Receive daily updates directly in your inbox - Subscribe here to a topic.
♦ Download the UN News app for your iOS or Android devices.
brazil|marginalized 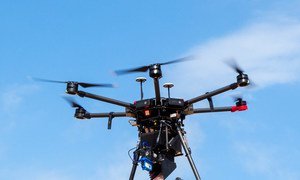