UN Photo/Violaine Martin
Journalists being briefed during Intra-Syrian talks at the UN Office at Geneva in 2017.

The United Nations expert on free expression has condemned President Donald Trump’s repeated attacks on the press, warning that the US leader’s rhetoric is eroding public trust in the media and could spark violence against journalists.

“His attacks are strategic, designed to undermine confidence in reporting and raise doubts about verifiable facts,” David Kaye, UN Special Rapporteur on freedom of expression and Edison Lanza, Inter-American Commission on Human Rights, said in a joint statement on Thursday.

Mr. Trump has labelled the media as being the “enemy of the American people,” “very dishonest” and “fake news,” the statement said. Moreover, he has accused the press of distorting democracy and spreading conspiracy theories and blind hatred.

The experts stressed that over the course of his presidency, Mr. Trump and his administration have sought to undermine reporting that had uncovered fraud, abuse, potential illegal conduct and disinformation.

“Each time the President calls the media ‘the enemy of the people’ or fails to allow questions from reporters from disfavoured outlets,” the experts continued, “he suggests nefarious motivations or animus.” However, they pointed out that not even one time was he able to show any specific reporting that was driven by untoward motivations.

“It is critical that the US administration promote the role of a vibrant press and counter rampant disinformation,” they underscored.

To this end, they urged President Trump to not only “stop using his platform to denigrate the media” but to condemn the attacks, including press threats at his own rallies.

Affirming that media attacks go beyond Mr. Trump’s language, they encouraged his administration, including the Justice Department, to “avoid pursuing legal cases against journalists in an effort to identify confidential sources,” saying that it undermines the media’s independence and blocks the public from accessing information.

The experts also appealed to the Government to “stop pursuing whistle-blowers through the tool of the Espionage Act.”

“We stand with the independent media in the United States, a community of journalists and publishers and broadcasters long among the strongest examples of professional journalism worldwide,” they asserted. “We especially urge the press to continue, where it does so, its efforts to hold all public officials accountable.”

The experts encouraged all media to act in solidarity against the efforts of President Trump to favour some outlets over others.

“Two years is two years too much, and we strongly urge that President Trump and his administration and his supporters end these attacks,” they concluded. 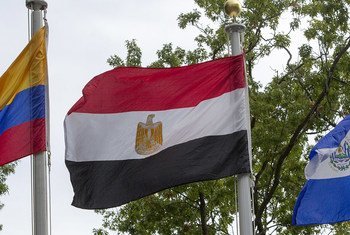 Galal El Behairy has been held in detention since February after penning a song critical of Egypt’s policies, prompting United Nations human rights experts on Thursday to urge the government to release him immediately.