OHCHR
OHCHR examines the issue of involuntary separation of Korean families from a human rights perspective.

A United Nations human rights expert on Tuesday urged North Korea to open a dialogue with him in parallel to the ongoing diplomatic efforts being undertaken on peace and denuclearisation of the Korean Peninsula.

“As recently as just several months ago, the world was fearing a prospect of a nuclear war”, said the UN Special Rapporteur on the situation of human rights in the Democratic People’s Republic of Korea (DPRK) – commonly referred to as North Korea - Tomás Ojea Quintana.

“While still in its infancy, the world is now witnessing a peace process that may bring real results”, he added, commending the governments of the north and south, for their resolve that there will be no more war and that there will be a new era of peace between the two Koreas.

He said, however, that North Korea has so far refused to engage with him, calling on the Government to begin a dialogue “as a concrete sign of their commitment, which will only serve to reinforce the ongoing process”.

Mr. Ojea Quintana’s appeal followed his eight-day visit to Seoul, the capital of South Korea, where he conducted interviews with people who have recently left the DPRK.

The expert said the worsening humanitarian crisis in the North underlined the importance of putting the lives of all North Koreans on the agenda, expressing concern that human rights terminology had failed to appear in any documents following talks between the two Koreas, and the US-DPRK summit in Singapore on 12 June.

He said it was not the first time that human rights concerns had been “seen as an inconvenience at a delicate moment. However, our experience as the UN has shown that there can be no genuine, peaceful and sustainable transition without it.”

The Special Rapporteur said that “while the difficulties that the recent arrivals from the DPRK alluded to were mostly economic and social, they all displayed a fear of expressing any opinion that could be considered as political, or a criticism of the Government or the leader”.

“Although none of them had a first-hand experience of detention, they all cited knowing someone, or some family, who were reportedly sent to political prison camps (kwanliso), and there is widespread fear of being sent to them,” Mr. Ojea Quintana added. 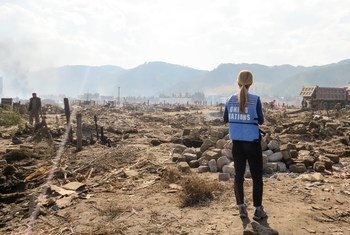 Following the recent positive political developments on the Korean Peninsula, the top United Nations official in North Korea envisages a surge in global humanitarian support for the millions there who are fighting malnutrition and living in poverty.