RCO/Mia Paukovic
A UN aid worker surveys the damage in the aftermath of devastating floods that hit the Democratic People’s Republic of Korea (DPRK) in September 2016.

Following the recent positive political developments on the Korean Peninsula, the top United Nations official in North Korea envisages a surge in global humanitarian support for the millions there who are fighting malnutrition and living in poverty.

“For the UN, obviously it would mean a lot,” Tapan Mishra, the UN Resident Coordinator in the Democratic People’s Republic of Korea (DPRK), told UN News, explaining that the 12 June summit between the leaders of DPRK and the United States not only opens up new opportunities for denuclearization and global peace, but would also help UN agencies to raise more funding to meet the country’s humanitarian needs.

He said that humanitarian funding for North Korea has declined dramatically since 2012. In 2017, only 31 per cent of the requested funding has been received. In 2018, the funding situation is even more alarming. Today, only 9 per cent or $10 million of the requested $111 million has been received to assist 6 million vulnerable people in DPRK through the 2018 Needs and Priorities Plan.

The lack of funding has already forced UN agencies to prioritize and scale down lifesaving programming. Chronic food insecurity and malnutrition remains widespread. Around 10.3 million people, or 41 per cent of the total population, are undernourished.

In this exclusive interview, Mr. Mishra talked about how the UN aid operations have continued to deliver despite the operational constraints, how economic sanctions have had unintended consequences for the lives of ordinary North Koreans and how the recent breakthrough to the political deadlock is giving rise to optimism among the people there.

Mr. Mishra leads the UN Humanitarian Country Team, consisting of six agencies on the ground – the UN Development Programme (UNDP), UN Children’s Fund (UNICEF), the World Food Programme (WFP), the UN Population Fund (UNFPA), the Food and Agriculture Organization (FAO), and the World Health Organization (WHO); international non-governmental organizations and other international organizations engaged in humanitarian activities – with many other agencies supporting from outside.

UN News: All eyes are on the Korean Peninsula right now. So, what do you think the implications are of the recent US-North Korean summit for the work of the UN?

Tapan Mishra: It’s a very important time. Regarding the recent summit that happened in Singapore between the leaders of DPR Korea and the US: it opens up new opportunities for global peace and hopefully stability and denuclearization. And for the UN, obviously, it would mean a lot. This is what we’ve been looking forward to: to have a diplomatic dialogue replace the possible threats of confrontation. And therefore, we hope to see a lot of support of the United Nations in DPRK to serve the people who are most needy and vulnerable, especially from a humanitarian perspective, right away.

As the Secretary-General has noted in his statement, relevant parts of the UN system stand ready to support this process in any way

The work of the UN could change depending on the “asks” that are made on the UN. The Secretary-General mentioned that the UN stands ready to serve. I see immediately there’ll be a huge surge in terms of humanitarian support that is needed.

As the Secretary-General has noted in his statement, relevant parts of the UN system stand ready to support this process in any way, including verification if requested by the key parties.  If there are other opportunities in the future moving from humanitarian to development, we would be able to look forward to making adjustments in our presence and our work in the future as well.

UN News: Can you describe what the UN country team does now to provide support to ordinary people there?

Tapan Mishra: At the moment, the United Nations Humanitarian Country Team in DPRK is primarily focused on providing humanitarian support to the most needy and vulnerable people. Of the 25.1 million people that are there, we are targeting in 2018 to support about 6 million people who need support – in terms of food security, nutrition, health, water, sanitation and hygiene. That’s what the UN country team and various agencies are providing in DPRK, with the support of the Office for the Coordination of Humanitarian Affairs (OCHA).

UN News: There is a UN strategic framework for DPRK that looks ahead to 2021. So, does that have to be changed according to the recent evolving diplomatic situation?

Tapan Mishra: We, all UN agencies, have signed the strategic framework with the Government of DPRK for the five years from 2017 to 2021. This strategic framework is the equivalent of the UN Development Assistance Framework (UNDAF) in a normal country. The situation in DPRK is quite unique. We could expand from humanitarian to possibly development in the future when the opportunity is right.

So, when this scenario changes in terms of moving away from the humanitarian, which is our primary work currently, it may need to be adapted accordingly.

WFP/Colin Kampschoer
In the Democratic People’s Republic of Korea, WFP implements food-for-work activities, providing food as payment for the building or repair of community infrastructure and assets (file)

UN News: Do you mean that the recent political situation will be reflected on the strategic framework in the future?

Tapan Mishra: It depends. As you see, the Secretary-General has very clearly stated that the relevant UN agencies stand ready to serve, whether it’s for the verification, or for other support required. If there are adjustments that need to be made, it will be made at the appropriate time.

UN News: Can you describe what life is like for average citizens in North Korea?

The humanitarian situation remains grim for millions of civilians in the country ... there are children who are affected by acute malnutrition

Tapan Mishra: The humanitarian situation remains grim for millions of civilians in the country. There are children who are affected by acute malnutrition. Chronic food insecurity and malnutrition remains widespread, driven by the limited availability of arable land – only 17% of land is arable – lack of access to modern agricultural equipment and fertilizers, and recurrent natural disasters. Chronic malnutrition is devastating to young children. A staggering number of children – over a quarter (27.9%) of children under-five –  are stunted.

This will affect them for the rest of their lives. And we have programmes for supporting kindergartens, children, infants, as well as pregnant and lactating mothers, the elderly, and people with disability. So, for them, life is challenging and difficult. There are gaps that need to be met with humanitarian assistance. Therefore, we are – you may have seen the needs and priorities document for 2018 – looking for support from donors to provide us financial assistance to be able to provide humanitarian aid to the people in need.

UN News: How much have economic sanctions affected everyday life in North Korea?

Tapan Mishra: I have raised this issue, not only with the Chair of the UN Sanctions Committee (1718 Committee) that there are unintended consequences of the sanctions that are being seen in terms of the work that we do in the UN and other humanitarian agencies. And we have received good support from the Committee to look into these issues. 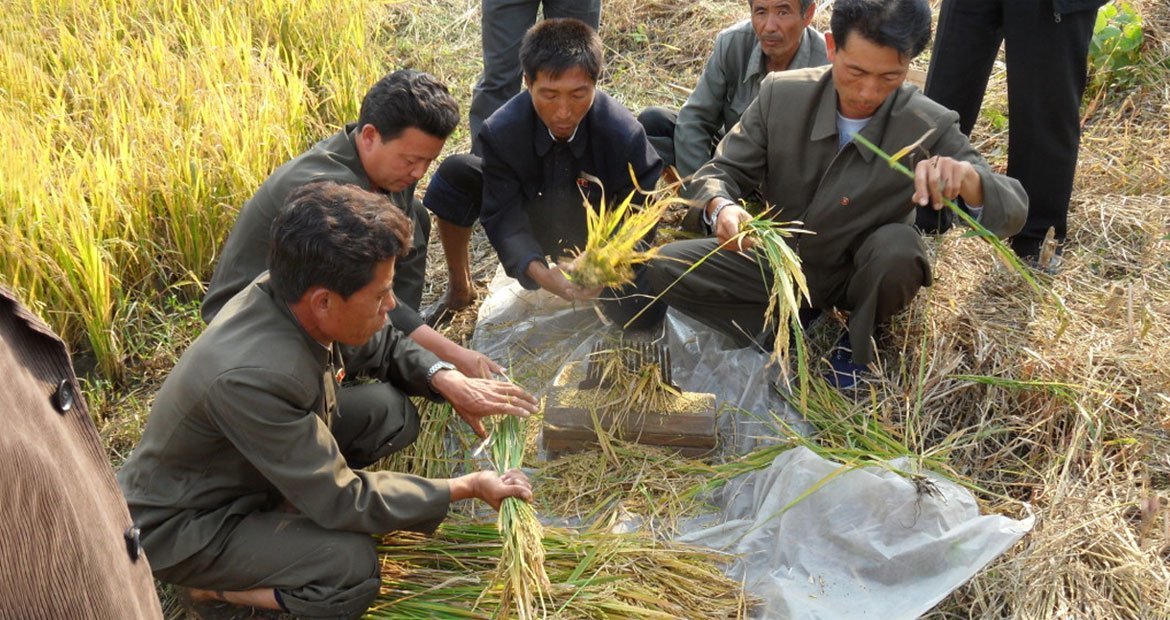 UN News: Looking over the last two decades, how has the UN humanitarian operation coped with the fluctuating political situation on the Korean Peninsula?

Tapan Mishra: That’s a very insightful question. In the last two decades, there has been ups and downs. Right now, we’re on a down. In the last three years, the receipt of humanitarian funding has been between only 20 and 30 per cent of the funding that we have requested. And this year, despite all these positive political directions, the funding currently is only at 9 per cent of the $111 million we are seeking.

UN News: So, do you expect that if the positive political development continues, more humanitarian funding will come?

Tapan Mishra: I really hope so. Now that the positive political doors are opening, the summit that perhaps opened the door of complete and verifiable denuclearization, we are hoping that Member States will support the UN and other agencies in providing humanitarian support to the most vulnerable population. And again, hopefully, that will lead to a new increase in the humanitarian support that we are receiving.

UN News: How does a deterioration in the political situation impact the humanitarian operation?

Tapan Mishra: Two or three things. First, humanitarian funding was very badly affected. That really impedes our ability to provide the support needed. So, agencies had to cut down on their programmes because there has been no funding. Second, we’ve had unintended consequences of sanctions. Even humanitarian aid has got affected. Third, the banking channel that we had for getting money in the country completely collapsed. We don’t have an option right now and we are looking for one. So, these three have been major challenges for us if we are to be able to provide the humanitarian assistance in the most effective manner.

UN News: Have you seen any changes in the level of cooperation or contact you have with the Government since last year?

Tapan Mishra:  Over the past years, the UN and partners have invested heavily in building confidence and understanding by the government for humanitarian actors and humanitarian interventions. Agencies work according to “no access, no aid”, an approach which is understood and accepted by the authorities. This continued, principled and robust engagement has translated into better access, better monitoring, better programming, and better cooperation.

What I hear from people [...] is a visible optimism and I’m sure everybody is looking forward to moving towards a better and more prosperous future with peace and stability

UN News: Have you seen any optimism among the ordinary North Koreans recently?

Tapan Mishra: Certainly. I haven’t been to DPRK after the summit but I will be going there soon. But what I hear from people, and I’ve been noticing there is a visible optimism and I’m sure everybody is looking forward to moving towards a better and more prosperous future with peace and stability ahead. So, I’m sure there is optimism, not only among the people in DPRK, but among the people in the world. So, this is an era of new peace and stability on the Peninsula, which will bring in hopefully global peace and development.

Tapan Mishra: The UN has been working there for a long time and, despite all the challenges, we have been serving on the mandates that we’ve had. We stand ready on the ground to do more as needed and we look forward to the support of all Member States in carrying out our mandate, by helping us get more humanitarian funding support, by helping us ensure that the unintended consequences of sanctions is reduced or completely overcome. And hopefully, peace and development will come in the future on the Peninsula. And hopefully, we will have a much better situation globally.

Afghanistan: Amid a deepening crisis, the UN is striving to assist people in need